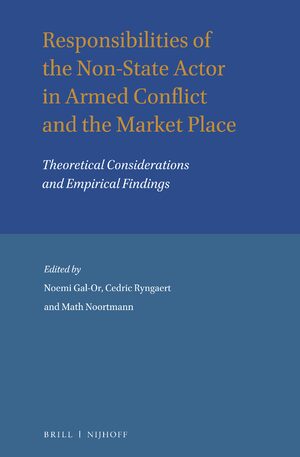 Editors: Noemi Gal-Or, Cedric Ryngaert and Math Noortmann
The central question of this pioneer work on the responsibility of non-state actors (NSAs) and the consequences thereof, is: To whom are such actors, in particular armed opposition groups and business corporations, accountable for their actions in armed conflict and in peace times? Does responsibility in international law apply to these NSAs qua groups? While much has been written about NSAs’ rights and participation in the global theatre as well as the responsibility of the state and international organisations for wrongful acts by NSAs, scant attention has been paid to questions of NSA organizational responsibility, in spite of their potential to wreak international havoc. This volume offers innovative insights into this unexplored territory by analyzing responsibility questions from both theoretical and empirical perspectives.
E-Book (PDF)

Cedric Ryngaert (PhD Leuven 2007) is Chair of Public International Law at Utrecht University (Netherlands). He is the research team leader of a project on unilateralism and global values, funded by the European Research Council and the Dutch Organization for Scientific Research. Among other publications, he authored Jurisdiction in International Law (2nd ed OUP 2015.) and co-edited The International Prosecutor (OUP 2012).

Math Noortmann (PhD Utrecht 1997) is Research Professor in Transnational Law and Non-State Actors. Before joining Coventry University in 2014, he taught international law and international relations at Oxford Brookes University and in the Netherlands, Germany and Singapore. His research interests lie in the areas of non-state actors, the relationship between law and politics, global governance, regionalism, trans-nationalism and human security.

A View from the Trenches

Part I: Conceptualizing the Responsibility of the NSA in International Law

17. FRANCIS ABIEW & NOEMI GAL-OR - International Responsibility of the AOG in International Law: Is there a Case for an African Approach?

18. NOEMI GAL-OR, MATH NOORTMANN, & CEDRIC RYNGAERT – Can the AOG and MNC Be Liable in International Law?

The conceptual part interests academics and legal professionals; the empirical part interests the former, students, NGOs, business, the military, international organizations and policy-makers engaging with, or wishing to regulate NSAs.