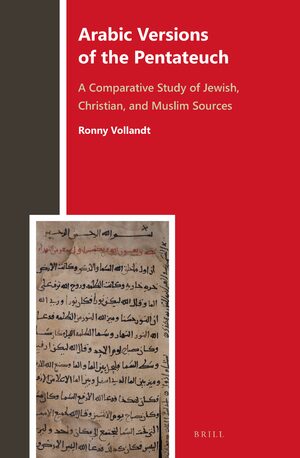 Arabic Versions of the Pentateuch

A Comparative Study of Jewish, Christian, and Muslim Sources

Author: Ronny Vollandt
This work offers a seminal research into Arabic translations of the Pentateuch. It is no exaggeration to speak of this field as a terra incognita. Biblical versions in Arabic were produced over many centuries, on the basis of a wide range of source languages (Hebrew, Syriac, Greek, or Coptic), and in varying contexts. The textual evidence for this study is exclusively based on a corpus of about 150 manuscripts, containing the Pentateuch in Arabic or parts thereof.
E-Book (PDF)

€122.00$160.00
​
Add to Cart
Ronny Vollandt, Ph.D. (2011), is a Professor of Jewish Studies at the Ludwig-Maximilians-Universität, Munich. His research focuses on the Arabic versions of the Bible and biblical exegesis in the Arabic language, more broadly, medieval Christian- and Judaeo-Arabic literature.
'Ronny Vollandt’s Arabic Versions of the Pentateuch is without a doubt the most important study of the Bible in Arabic to appear in recent decades. He combines close textual study of the earliest Arabic version of the Pentateuch, translated from the Syriac Peshitta in the early ninth century CE, with a masterful overview of Arabic Bible translations in general and their importance for the history of the largely Jewish and Christian communities in which they were produced. The book is a ground-breaking contribution to a long neglected area of study that is crucial to the history of the relations between Jews, Christians, and Muslims. Vollandt prepares the way for future scholars of the Bible in Arabic in many ways, one of the most important of them being his careful listing and description of all the available manuscripts of the Pentateuch in Arabic translation, scattered in libraries around the world or available in digitized form. His method of analyzing the Arabic translators’ technique of translation is masterful and sets a new standard for this exacting task, which, when well done, tells the historian much about the circumstances in synagogue or church life in which the translation was produced. Vollandt’s Arabic Versions of the Pentateuch is a must-read for any future scholar who would study the Arabic translation of a biblical book and one hopes that his success will inspire a new generation to discover the joys and benefits of Arabic Bible research'. - Sidney H. Griffith, Institute of Christian Oriental Research, The Catholic University of America, Washington
'Vollandt has succeeded admirably in his goal of arguing for the importance and relevance of the Arabic versions in biblical scholarship, and it is hoped that he and others will build on this work by engaging in similar studies of other sections of the Bible. Brill’s recently launched Biblia Arabica series, of which this is the second volume to appear, will serve as an excellent forum for such future efforts'. - John Kaltner, Rhodes College, Memphis, Tennessee [Review published by RBL © 09/2016 by the Society of Biblical Literature]
TABLE OF ILLUSTRATIONS
ACKNOWLEDGEMENTS
PREFACE

CHAPTER TWO - “A CLEAR LANGUAGE THAT ORDINARY PEOPLE UNDERSTAND”: THE LINGUISTIC BACKGROUND
The Melkites
The Syriac Orthodox Church
The Church of the East
The Copts
Jewish Communities
The Samaritans