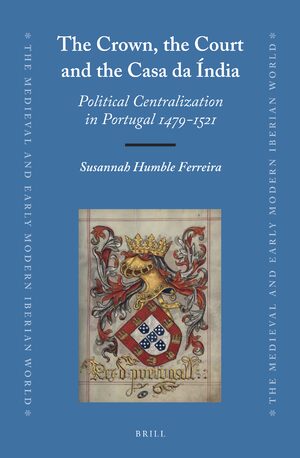 The Crown, the Court and the Casa da Índia

Series:  The Medieval and Early Modern Iberian World, Volume: 60
Author: Susannah Ferreira
In The Crown, the Court and the Casa da Índia, Susannah Humble Ferreira examines the social and political context that gave rise to the Portuguese Overseas Empire during the reigns of João II (1481-95) and Manuel I (1495-1521). In particular the book elucidates the role of the Portuguese royal household in the political consolidation of Portugal in this period. By looking at the relationship of the Manueline Reforms, the expulsion of the Jews and the creation of the Santa Casa da Misericordia to the political threat brought on by the expansion of Ferdinand of Aragon into the Mediterranean, the author re-evaluates the place of the overseas expansion in the policies of the Portuguese crown.
E-Book (PDF)

€105.00$138.00
​
Add to Cart
Susannah Humble Ferreira, Ph.D. (2003), The Johns Hopkins University is an Associate Professor at the University of Guelph in Canada, She has published numerous articles and chapters on the history of Portugal during the reign of Manuel I (1495-1521).
Contents
Acknowledgements ix
List of Abbreviations x
Names and Currency xi
Introduction 1
1 Spin Doctors of the Crown: The Chroniclers and Their Contexts 17
Fernao Lopes, (Crónista Mor 1434–54) 20
Gomes Eanes de Zurara, (Crónista Mor 1454–74) 22
Dr. Vasco Fernandes de Lucena, (Crónista Mor 1474–97) 26
Rui de Pina, (Crónista Mor 1497–1522) 30
Duarte Galvao 37
Joao de Barros and Damiao de Gois 39
2 From Royal Household to Royal Court: Patronage as a Political
Strategy 44
Political Utility of Large Households 45
Limitation of Household Size 46
‘New Monarch’ or King of the Roads? 54
Reorganization and Expansion of the Royal Household 58
3 Inquiry and Reform 69
Return of the Exiles 71
Expulsion of Jews and Muslims 75
The Manueline Reforms 79
Bureaucratization and Plural Appointments 84
Re-routing the Court: Palaces and Itineraries 92
4 Alms for the King 101
Controlling the Episcopacy 102
Hospitals and Confraternities 108
The Order of Christ and the Conquest of Morocco (1495–1510) 120
5 The Crown and Its Castles 128
Castles and Councillors 130
Changes to Warfare at the Turn of the Sixteenth Century 140
North Africa 142
Death of Ferdinand of Aragon 147
Estado da India 148
Conclusion 157
Bibliography 171
Index 182
All interested in the history of European royal courts, and anyone concerned with the European overseas expansion.