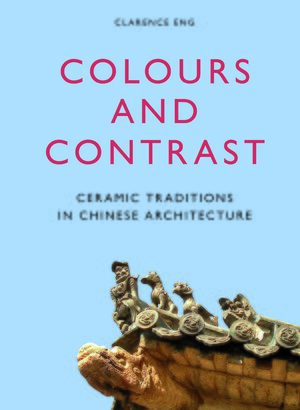 Author: Clarence Eng
Ancient Chinese halls are celebrated for their majestic rooflines. Their finish and visual
mass have evolved to meet the tastes of patrons and to signal the role of their occupants,
whilst of course ensuring structural robustness. However, the visual impact of these
structures comes chiefly from their ceramic ornament. Indeed, travellers through the
centuries would first have glimpsed a distant city by the sunlight glinting from its tallest
rooftops. These important ceramics can sometimes engage fully with established
disciplines such as architecture or fine ceramics, but in Colours and Contrast Clarence
Eng cogently argues that they be studied in their own right. He introduces the aesthetics,
history and technology of Chinese architectural ceramics, demonstrates that similar
levels of skilled expertise were applied both to glazed and unglazed ornament, and
describes their special contribution to structures designed primarily to delight the
viewer, such as screen walls and pagodas.
Hardback

174,00 €227,00 $
Add to Cart
Clarence Eng, Ph.D. (2008) is a research associate at SOAS, University of London. After graduating at Cambridge his career in Shell International included senior posts in China. He is now an architectural historian specialising in Chinese history and cultural transmission.
All who are interested in Chinese architecture and art history, including museum curators, collectors and scholars. Also students of ceramics, their role as ornament and as signifiers, and their technology.