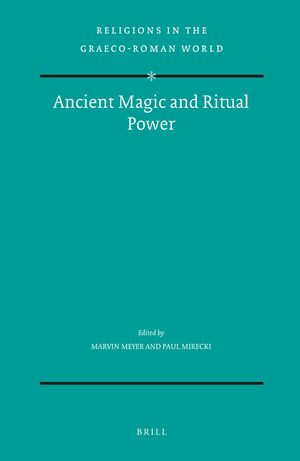 Editors: Paul Mirecki and Meyer
This volume contains a series of provocative essays that explore expressions of magic and ritual power in the ancient world. The essays are authored by leading scholars in the fields of Egyptology, ancient Near Eastern studies, the Hebrew Bible, Judaica, classical Greek and Roman studies, early Christianity and patristics, and Coptology.
Throughout the book the essays examine the terms employed in descriptions of ancient magic. From this examination comes a clarification of magic as a polemical term of exclusion but also an understanding of the classical Egyptian and early Greek conceptions of magic as a more neutral category of inclusion.
This book should prove to be foundational for future scholarly studies of ancient magic and ritual power.

This publication has also been published in paperback, please
click here for details.
E-Book (PDF)

€182.00$267.00
​
Add to Cart
Marvin Meyer, Ph.D. (1979) in Religion, Claremont Graduate School, is Professor of Religion at Chapman University, Orange, California, and Director of the Coptic Magical Texts Project of the Institute for Antiquity and Christianity. He has published extensively on ancient Gnostic and magical traditions.
Paul Mirecki, Th.D. (1986) in Religious Studies, Harvard Divinity School, is Associate Professor of Religious Studies at the University of Kansas, Lawrence, Kansas. His publications include a wide variety of articles on ancient Mediterranean religions with a primary focus on Coptic papyrology.
Students and scholars of ancient Mediterranean and Near Eastern religion and culture, including readers in Egyptology, ancient Near Eastern studies, the Hebrew Bible, Judaica, classical Greco-Roman studies, early Christianity and patristics, and Coptology.