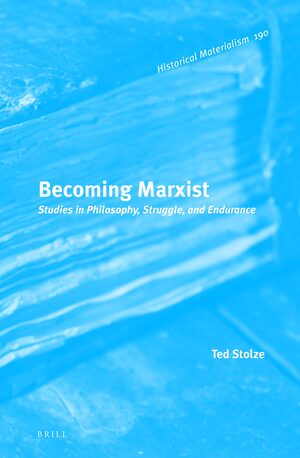 Studies in Philosophy, Struggle, and Endurance

Author: Ted Stolze
In Becoming Marxist Ted Stolze offers a series of studies that take up the importance of philosophy for the development of an open and critical Marxism. He argues that an adequate ‘philosophy for Marxism’ must be open to engagement with a diverse range of traditions, texts, and authors – from Paul of Tarsus, via Averroes, Spinoza, and Hobbes, to Althusser, Deleuze, Negri, Habermas, and Žižek. Stolze also explores such practical contemporary issues as the politics of self-emancipation, the nature of Islamophobia, and climate change.
E-Book (PDF)

€136.00$163.00
​
Add to Cart
Ted Stolze, Ph.D. (1996), Claremont Graduate University, is Associate Professor of Philosophy at Cerritos College. He is the co-editor (with Warren Montag) of The New Spinoza (University of Minnesota Press, 1997) and has published articles on Spinoza, Hobbes, Althusser, Deleuze, Habermas, Negri, and Žižek.
“In this collection of essays, suggestively titled Becoming Marxist, Ted Stolze gives us a privileged view of the development of the conceptual machine of his philosophy, above all, around the virtuous circle of Marx-Spinoza, but also, at the same time, in relation to the gesture that most clearly characterizes his originality in the panorama of contemporary critical thought, which consists in thinking one into the other, and together, Deleuze, Negri and Althusser.”
— Vittorio Morfino, Senior Researcher in the History of Philosophy at the University of Milan-Bicocca

“Ted Stolze's Becoming Marxist reveals at its core not only that Becoming Marxist is an ongoing process of transformation, a continual process of engaging with the conjunctures of history and philosophy—that it is inseparable from other becomings that are both theoretical and political. In terms of the former, Stolze’s book engages with the thought initially of Deleuze, Spinoza, Negri, and Habermas, situating itself with respect to the major philosophical debates within Marxism, but it is with respect to the latter that Stolze 's book stands out. The book engages with some of the major practical challenges to Marxist politics, climate change and religious conflict and intolerance.The book is exemplary in its militant commitment to theoretical rigor and practical engagement, demonstrating that Marxism is less a totalizing theory than a continuing process of militant transformation.”
— Jason Read, Associate Professor of Philosophy, University of Southern Maine

“From Spinoza to Althusser and Deleuze with Paul of Tarsus as a constant interlocutor, Ted Stolze retraces the ‘underground current’ of materialism as a philosophical tendency, offering invaluable insights on the political significance of materialist philosophical interventions and reminding us of the many associations of materialism with resistance and the struggle for social justice and human emancipation.”
— Panagiotis Sotiris, member of Popular Unity, and writer and activist in Greece

Part 1 Marxism and the History of Philosophy


1 What is a Philosophical Tendency?
2 Paul of Tarsus, Thinker of the Conjuncture
3 Paul’s Gift Economy: Wages, Debt, and Debt Cancellation
4 Althusser and the Problem of Historical Individuality
5 ‘The Roaring of the Sea’: Hobbes on the Madness of the Multitude
6 Spinoza’s Three Modes of Rebellion: Indignant, Glorious, and Serene
7 Alexandre Matheron on Militant Reason and the Intellectual Love of God
Interlude: An Ethics for Marxism: Spinoza on Fortitude


8 Death and Life in Marx’s Capital: An Ethical Investigation
9 Hegel or Spinoza: Substance, Subject, and Critical Marxism
10 Contradictions of Hyperreality: Baudrillard, Žižek, and Virtual Dialectics
11 A Marxist Encounter with the Philosophy of Gilles Deleuze
12 Deleuze and Althusser: Flirting with Structuralism
13 Marxist Wisdom: Antonio Negri on the Book of Job
14 A Displaced Transition: Jürgen Habermas on the Public Sphere


Part 3 Self-Emancipation, Then and Now


15 Self-Emancipation and Political Marxism
16 Islamophobia and Self-Emancipation
17 Climate Crisis, Ideology, and Collective Action
Coda. Beatitude: Marx, Aristotle, Averroes, Spinoza
Bibliography Index
Anyone interested in the intersection of Marxism and philosophy and in a distinctively Marxist approach to the history of philosophy.