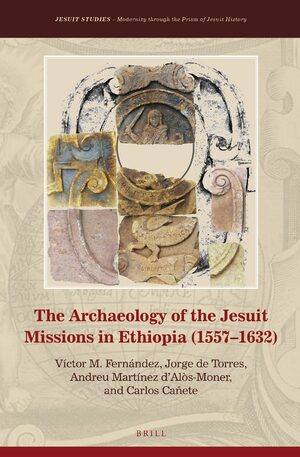 Authors: Victor M. Fernández, Jorge De Torres, Andreu Martínez d'Alòs-Moner, and Carlos Cañete
One of the earliest and most ambitious projects carried out by the Society of Jesus was the mission to the Christian kingdom of Ethiopia, which ran from 1557 to 1632. In about 1621, crucial figures in the Ethiopian Solomonid monarchy, including King Susenyos, were converted to Catholicism and up to 1632 imposing missionary churches, residences, and royal structures were built. This book studies for the first time in a comprehensive manner the missionary architecture built by the joint work of Jesuit padres, Ethiopian and Indian masons, and royal Ethiopian patrons. The work gives ample archaeological, architectonic, and historical descriptions of the ten extant sites known to date and includes hypotheses on hitherto unexplored or lesser known structures.
E-Book (PDF)

€165.00$190.00
​
Add to Cart
Víctor M. Fernández, PhD (1983), Universidad Complutense de Madrid, is professor of archaeology at that university. He has conducted excavations in Sudan and Ethiopia since 1978 and published monographs and articles on those areas, including The Blue Nile Project (2003).

Jorge de Torres, PhD (2012), Universidad Complutense de Madrid, is research cataloguer at the British Museum, London. He has conducted excavations and published about the archaeology of Spain, Morocco, Ethiopia, Somaliland, and Mozambique.

Andreu Martínez d’Alòs-Moner, PhD (2008), European University Institute, Florence, is associate professor at the University of Gondär, Ethiopia. He was editor of the Encyclopaedia Aethiopica at the University of Hamburg and has published Envoys of a Human God: The Jesuit Mission to Christian Ethiopia, 1557–1632 (Brill, 2015).

Carlos Cañete, PhD (2009), Universidad de Málaga, is researcher at the Centro de Ciencias Humanas y Sociales (CSIC, Madrid). He has conducted field-work in Spain, Morocco, and Ethiopia. He is a historian specializing in the history of representations of African and Mediterranean cultures.


“This is a first-rate and comprehensive study, richly illustrated and (as one would expect with Brill) well presented […]. It sets the standard for historical archaeological work in eastern Africa and will hopefully encourage other archaeologists, working with Ethiopian heritage professionals, scholars and communities, to engage with some of the more recent sites, all places that have much to reveal about the complex and rich history of imperial Ethiopia and its engagement with the outside world over the last six hundred or so years.”
Niall Finneran, University of Winchester. In: Azania: Archaeological Research in Africa, Vol. 53, No. 1 (2018), pp. 123–125.

“This substantial, well-produced book has raised the state of knowledge of this field, as well as our understanding of historical archaeology as applied to an African context, to a whole new level. […] It should remain a major reference work for archaeologists, anthropologists, and historians for many years to come.”
Tania Tribe, SOAS University of London. In: Journal of Early Modern History, Vol. 24, N. 3 (2020), pp. 293–295.

1 Introduction: The Fieldwork and the Team
Víctor M. Fernández

2 The Infrastructure of the Mission: Convents, Palaces, and Temples
Andreu Martínez d’Alòs-Moner
2.1 The Jesuit Mission: From Oviedo to Mendes
2.2 Pedro Páez: The Experimental Phase, 1614–21
2.3 João Martins and the Indian Builders: The Patriarchal Phase, 1626–32
2.4 The Mughal Hypothesis

4 The Politics of Domination in Missionary and Royal Architecture
Carlos Cañete and Jorge de Torres
4.1 Introduction
4.2 Main Traits and Exceptions
4.3 Particular Interests, Global Consequences
4.4 The Material Accommodation of Power
4.5 The Regulation of Manners
4.6 From Materiality to Society