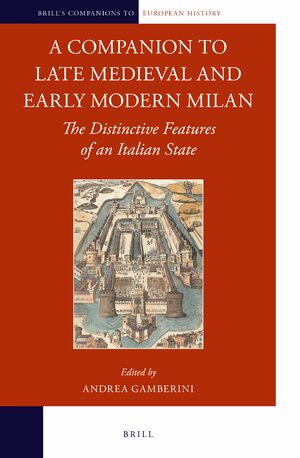 A Companion to Late Medieval and Early Modern Milan

The Distinctive Features of an Italian State

Editor: Andrea Gamberini
Milan was for centuries the most important center of economic, ecclesiastical and political power in Lombardy. As the State of Milan it extended in the Renaissance over a large part of northern and central Italy and numbered over thirty cities with their territories. A Companion to Late Medieval and early Modern Milan examines the story of the city and State from the establishment of the duchy under the Viscontis in 1395 through to the 150 years of Spanish rule and down to its final absorption into Austrian Lombardy in 1704. It opens up to a wide readership a well-documented synthesis which is both fully informative and reflects current debate. 20 chapters by qualified and distinguished scholars offer a new and original perspective with themes ranging from society to politics, music to literature, the history of art to law, the church to the economy.

€197.00$258.00
​
Add to Cart
Andrea Gamberini, Ph.D. (2000), is Associate Professor of Medieval History at the University of Milan. He is also Life Member of Clare Hall (Cambridge) and Christ Church (Oxford).
"...This means that the chapters draw on the latest research by those who know their topics with an enviable thoroughness... certainly useful for those seeking a good starting point for further research on a fascinating city and its surroundings."
Evelyn Welch (King's College London), Renaissance Quarterly, Volume LXIX, No. 1
Acknowledgements ... vii
List of Figures and Maps ... viii
Notes on the Contributors ... xi

Introduction
Between Continuity and Discontinuity:In Search of the Original Characteristics of the State of Milan ... 1
Andrea Gamberini

1 Milan and Lombardy in the Era of the Visconti and the Sforza ... 19
Andrea Gamberini

3 The Lombard Church in the Late Middle Ages ... 69
Giancarlo Andenna

4 The Reformation and the Catholic Revival in the Borromeo’s Age ... 93
Claudia Di Filippo

18 Towards a New Social Category: The Military ... 454
Alessandra Dattero

19 Nobility in Lombardy between the Late Middle Ages and the Early Modern Age ... 477
Federico Del Tredici

20 People, Groups, and Institutions: Charity and Assistance in the Duchy of Milan from the 15th to the 17th Century ... 499
Giuliana Albini

Index ... 525
This volume aims to make accessible to a wide public an historical synthesis which is both fully informative and reflects the current historiographical debate. It aims at meeting the needs of readers who are educated and interested, but not necessarily expert in the history of Lombardy.