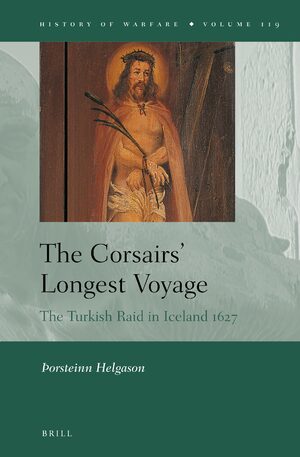 The Turkish Raid in Iceland 1627

Author: Þorsteinn Helgason
During the summer of 1627, corsairs from Algiers and Salé, Morocco, undertook the long voyage to Iceland where they raided the eastern and southern regions of the country, resulting in the deaths of around thirty people, and capturing about 400 further individuals who were sold on the slave markets. Around 10% of the captives were ransomed the next twenty years, mostly through the efforts of the Danish monarchy.
In this volume, the history of these extraordinary events and their long-lasting memory are traced and analysed from the viewpoints of maritime warfare, cultural encounters and existential options, based on extensive use of various sources from several languages.

€154.00$185.00
​
Add to Cart
Þorsteinn Helgason, Ph.D. (2013), University of Iceland, is Associate Professor of History emeritus at the University of Iceland. His publications include textbooks in history, documentary films (e.g. Atlantic Jihad), Opening the Mind or Drawing Boundaries? History Texts in Nordic Schools (ed.) and articles on the Turkish Raid.
Contents

Preface
List of Figures
A Note on Names and Letters

1 The Inception of the Turkish Raid, and Its Central Character
The Return of the Moors
Compaen the Pirate
Iceland Ahoy
How Do We Know This?

3 Incursion and Salvation in the East Fjords
Enter the Corsairs
Reign of Terror in Berufjörður
South and North of Berufjörður
Did the Raiders Go to Eydalir?
The Corsairs’ Farewell
Heroes and Guardian Spirits
Folklore and Fact

8 Cultural Memory
Scribes of Memory
A Tool of National Memory: The Turkish Raid in School Textbooks

9 The Visible Turkish Raid
Landscape
Works of Art
I Quatri Mori by Pietro Tacca
Adriaen Matham’s Drawings
Kross: A Sword Out of the Mouth of Christ

Students of piracy, Mediterranean corsairs, captivity, ransoming and slavery, cultural memory of trauma, and early modern encounters between Islam and Christianity, and between Denmark and Iceland, and their relations with the “Barbary” cities of Algiers and Salé.