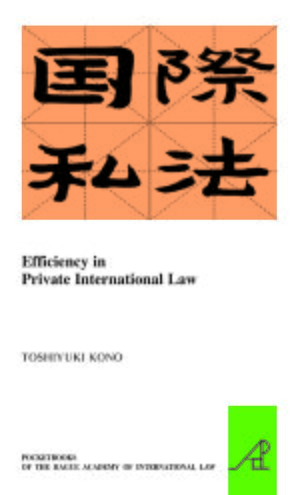 Reihe:  The Pocket Books of The Hague Academy of International Law / Les livres de poche de l'Académie de droit international de La Haye, Band: 26
AutorIn: Toshiyuki Kono
Private international law (PIL) problems have existed for centuries when people from various territories and religious and social groups engaged in mutual contacts. Some of the core issues of this discipline have been critically reviewed during the so-called conflicts revolution which took place during the twentieth century in the American academic literature and court practice. However it seems that not much discussion on methodologies of PIL has developed since then. This book, inspired by the Law and Economics approach, introduces the concept of efficiency into PIL, aiming to show new dimensions of traditionally important issues. First, this author challenges the traditional understanding that uniform law is always more desirable than PIL, and raises questions on the rationale and possibility of the unification of PIL. Second, territoriality has been understood to exclude PIL. This book clarifies why such understanding does not hold in the twenty-first century especially in the field of intellectual property, and argues that a one-sizefits-all model would not be appropriate in the context of cross-border insolvency.
E-Book (PDF)