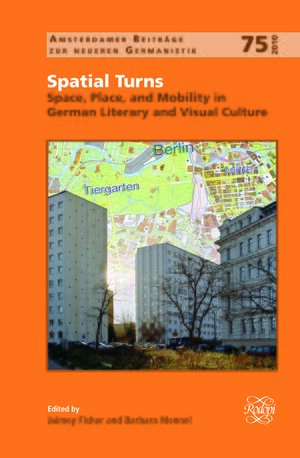 Space, Place, and Mobility in German Literary and Visual Culture

Editors: Jaimey Fisher and Barbara Mennel
The phrase “spatial turns” signals the growing importance of space as an analytical as well as representational category for culture. The volume addresses such emerging modes of inquiry by bringing together, for the first time, essays that engage with spatial turns, spatiality, and the theoretical implications of both in the context of German culture, history, and theory. Migrating from fields like geography, urban studies, and architecture, the new centrality of space has transformed social-science fields as diverse as sociology, philosophy, and psychology. In cultural studies, productive analyses of space increasingly cut across the studies of literature, film, popular culture, and the visual arts. Spatial Turns brings together essays that apply a spatial analysis to German literature and other media and engages with specifically German theorizations of space by such figures as Siegfried Kracauer and Walter Benjamin.
The volume is organized in four sections: “Mapping Spaces” addresses cartography in all forms and in its intersection with culture; “Spaces of the Urban” takes up one of the key sites of spatial studies, the city; “Spaces of Encounter” considers how Germany has become a contact zone for multiple ethnicities; and “Visualized Spaces” concerns the theorization of space in film and new media studies.
E-Book (PDF)