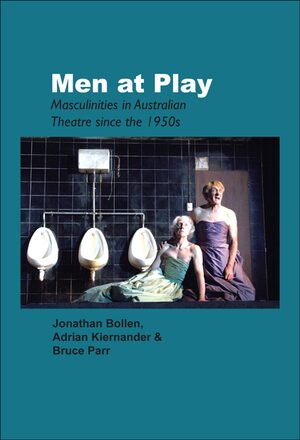 Masculinities in Australian Theatre since the 1950s

Series:  Australian Playwrights Online, Volume: 11 and  Australian Playwrights, Volume: 11
Authors: Jonathan Bollen, Adrian Kiernander, and Bruce Parr
How are masculinities enacted in Australian theatre? How do Australian playwrights depict masculinities in the present and the past, in the bush and on the beach, in the city and in the suburbs? How do Australian plays dramatise gender issues like father-son relations, romance and intimacy, violence and bullying, mateship and homosexuality, race relations between men, and men’s experiences of war and migration?
Men at Play explores theatre’s role in presenting and contesting images of masculinity in Australia. It ranges from often-produced plays of the 1950s to successful contemporary plays – from Dick Diamond’s Reedy River, Ray Lawler’s Summer of the Seventeenth Doll, Richard Beynon’s The Shifting Heart and Alan Seymour’s The One Day of the Year to David Williamson’s Sons of Cain, Richard Barrett’s The Heartbreak Kid, Gordon Graham’s The Boys and Nick Enright’s Blackrock.
The book looks at plays as they are produced in the theatre and masculinity as it is enacted on the stage. It is written in an accessible style for students and teachers in drama at university and senior high school. The book’s contribution to contemporary debates about masculinity will also interest scholars in gender, race and sexuality studies, literary studies and Australian history.
E-Book (PDF)

" Men at Play makes a timely contribution to current social and scholarly debates about masculinity." - in: Theatre Research International, 34.2
List of figures
Foreword by the Series editor
Author biographies
Acknowledgements
Introduction
Chapter 1: “What’s a man to do?”
Chapter 2: Fists, boots and blues
Chapter 3: The bully and the businessman
Chapter 4: Black men, white men
Chapter 5: In the theatre of war
Chapter 6: “Wog boy” moves
Chapter 7: Representing gay masculinities
Chapter 8: From father to son
Chapter 9: Between the sea and the sky
References
Index