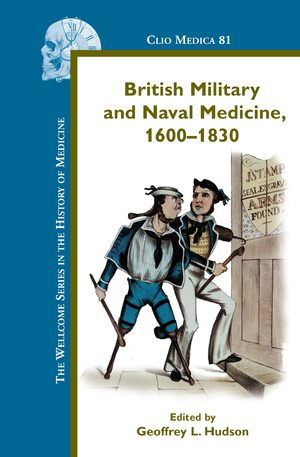 Editor: Geoffrey L. Hudson
Standing armies and navies brought with them military medical establishments, shifting the focus of disease management from individuals to groups. Prevention, discipline, and surveillance produced results, and career opportunities for physicians and surgeons. All these developments had an impact on medicine and society, and were in turn influenced by them. The essays within examine these phenomena, exploring the imperial context, nursing and medicine in Britain, naval medicine, as well as the relationship between medicine, the state and society.
British Military and Naval Medicine challenges the notion that military medicine was, in all respects, ‘a good thing’. The so-called monopoly of military medicine and the authoritarian structures within the military were complex and, at times, successfully contested. Sometimes changes were imposed that cannot be characterised as improvements.
British Military and Naval Medicine also points to opportunities for further research in this exciting field of study.
E-Book (PDF)

€81.00$103.00
​
Add to Cart
Geoffrey L. Hudson, D.Phil., is Assistant Professor of the History of Medicine in the Northern Ontario School of Medicine (Lakehead and Laurentian Universities, Canada). His research interests are in the areas of the social history of medicine, as well as war and society. He is currently completing a study of war and disability in early-modern Britain.
" British Military and Naval Medicine is thus an important contribution to medical, naval and military history, one which increases our understanding of the impact of maritime exploration and naval service on sailors and on wider society." – in: International Journal of Maritime History XX/1 (June 2008), 429–431
"[T]his collection… has to be seen as a welcome addition to the literature, being of interest as much to the general public as to the academic reader. As well as providing a good introduction to a broad range of topics in military and naval medicine in the period concerned, it usefully indicates areas for further research, with a key strength lying in the abundant endnote referencing of secondary and archival sources." – in: Wellcome History 39 (Winter 2008), 21-22
"[T]hese essays contribute to our knowledge of the details of British medical practice during wartime as well as during peace, and establish that the relationship between civilian and naval or military medicine is closer than often assumed… a well-considered collection, demonstrating the broad scope of military and naval medicine during a fundamental period of British warfare." – in: Social History of Medicine 22/3 (2009), 629-63
"The essays… build on those findings and highlight areas for future research.… there can be no doubt that readers will find much material here to inform their own conclusions…" – in: Medical History, 54 (2010), 410–411

Geoffrey L. HUDSON, Introduction: British Military and Naval Medicine, 1600–1830
J.D. ALSOP, Warfare and the Creation of British Imperial Medicine, 1600–1800
Paul E. KOPPERMAN, The British Army in North America and the West Indies, 1755–83: A Medical Perspective
Mark HARRISON, Disease and Medicine in the Armies of British India, 1750–1830: The Treatment of Fevers and the Emergence of Tropical Therapeutics
Eric GRUBER VON ARNI, Who Cared? Military Nursing during the English Civil Wars and Interregnum, 1642–60
Philip R. MILLS, Privates on Parade: Soldiers, Medicine and the Treatment of Inguinal Hernias in Georgian England
Patricia Kathleen CRIMMIN, British Naval Health, 1700–1800: Improvement over Time?
Margarette LINCOLN, The Medical Profession and Representations of the Navy, 1750–1815
Christine STEVENSON, From Palace to Hut: The Architecture of Military and Naval Medicine
Geoffrey L. HUDSON, Internal Influences in the Making of the English Military Hospital: The Early-Eighteenth-Century Greenwich