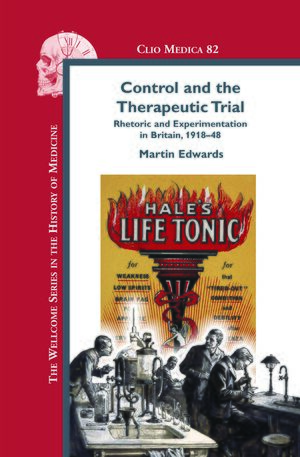 Control and the Therapeutic Trial

Rhetoric and Experimentation in Britain, 1918-48

Author: Martin Edwards
How do doctors decide whether their drugs, or other treatments, actually work? In practice this can be fiendishly difficult. Nowadays the gold standard is the randomised controlled trial (RCT). But the RCT is a recent invention, and the story of how it came to dominate therapeutic evaluation from the latter half of the twentieth century involves acrimony, confrontation, and manipulation of the powerful rhetoric of ‘control’.
Control and the Therapeutic Trial examines the development of the RCT from the eclectic collection of methodologies available to practitioners in the early-twentieth century. In particular, it explores the British Medical Research Council’s (MRC) exploitation of the term ‘controlled’ to help establish its own ‘controlled trials’ as the gold standard for therapeutic evaluation, and, ultimately, the MRC itself as the proper authority to adjudicate on therapeutic efficacy. This rhetorical power still clings, and is exploited today.
Control and the Therapeutic Trial will be of interest not only to historians of twentieth-century medicine and practising clinicians who take therapeutic decisions, but to anyone who seeks a broader insight into the forces that shaped, and control, the modern controlled trial.
E-Book (PDF)

€62.00$81.00
​
Add to Cart
About MyBook
Martin Edwards is a physician who has practised as a family doctor in London for over twenty years. Throughout this time he has maintained his involvement both in the history of medicine and in clinical research, examining notions of evidence in clinicians’ therapeutic decision-making. He is an honorary research associate at The Wellcome Trust Centre for the History of Medicine at UCL.
"a fascinating conclusion…"
– in: SciTech Book News, June 2008

"…the book is indeed an impressive attempt… Control and the Therapeutic Trial successfully questions the solemn rigidity of a contemporary scientific truth…. The book is a welcome addition to the scholarship dealing with social constructions of truths. The content, along with the easy style of writing, should ideally attract readers of diverse interest: historians of medicine and science, practising physicians as also non-specialist readers."
– in: Wellcome History 41 (2009), 20-21

"In this excellent book Martin Edwards demonstrates that words with histories are never innocent… Edwards provides a historically rich dissection of how the controlled trial became the preferred tool to produce knowledge that could direct practice… This book fills a gap in our understanding of what has been called the therapeutic revolution."
– in: Metascience 18 (2009), 437–441

"Edwards…. does illustrate a fundamental shift of sense over the three decades covered by this study… Edwards draws on a generation of scholarship, including several well-known but unpublished dissertations."
– in: Medical History, 54 (2010), 421–422

Acknowledgements
Note on National Archives Source Material
Introduction
1 No Word is Innocent: The History and Rhetoric of Controlled Trials prior to 1948
2 Good, Bad or Offal? The Rhetoric of Control in the Evaluation of Raw Pancreas Therapy
3 Bright Lights, Smoky Cities: Light Therapy in 1920s Britain
4 Control and the MRC’s Evaluation of Serum Therapy for Pneumonia, 1929–34
5 Keeping it Controlled: The MRC’s Trials of Immunisation against Influenza
6 Whose Words are they Anyway? The Contrasting Strategies of Almroth Wright and Bradford Hill to Capture the Nomenclature of Controlled Trials
7 Conclusion: What’s Controlled about the Controlled Trial?
Bibliography
Index
Control and the Therapeutic Trial will be of interest not only to historians of twentieth-century medicine and practising clinicians who take therapeutic decisions, but to anyone who seeks a broader insight into the forces that shaped, and control, the modern controlled trial.