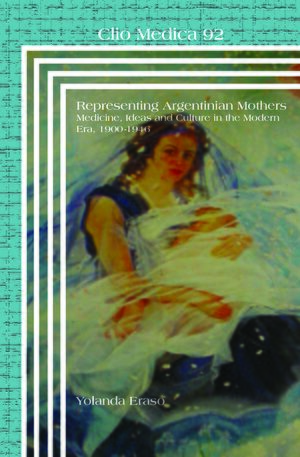 Series:  Clio Medica Online, Volume: 92 and  Clio Medica, Volume: 92
Author: Yolanda Eraso
Motherhood holds a special place in Argentinian culture. Representing Argentinian Mothers examines the historical intersections of medicine and culture that have underpinned the representations of motherhood during the first half of the twentieth century. From the emergence of a medicalised maternal figure at the beginning of the century to the appearance of a new, politicised mother-figure by the time of Eva Perón, the contentious representations of motherhood constitute a privileged viewpoint to explore the tensions and conflicts underlying the country’s modernisation process. At the core of the analysis is an evaluation of the way in which medical representations of motherhood have been implicated, confirmed or contested in other significant areas of the social and cultural fields.
Through detailed examination of a rich selection of sources including medical texts, newspapers, novels, photojournalism, and paintings, Representing Argentinian Mothers adopts an interdisciplinary approach and an innovative framework based on categories and notions drawn from the History of Ideas and Cultural History. By enquiring about the influence of medicine in the field of ideas, beliefs and images, Yolanda Eraso elaborates new insights to understand their interaction, which will appeal to anyone with an interest in the Medical Humanities.
E-Book (PDF)

€88.00$111.00
​
Add to Cart
Yolanda Eraso is Associate Lecturer, Faculty of Health and Life Sciences, Oxford Brookes University. She has published on various aspects of the social history of medicine and on contemporary issues in health policy.
"Eraso’s study not only manages to historicize motherhood profoundly in the different fields of analysis, but also presents the interplay of medical discourses of maternity and its varied and contesting cultural facets. [...] To summarize, what can be concluded from Eraso’s extensive study, is that motherhood increasingly became an object of politization in the first half of the 20th century. Medicalization, according to Eraso’s analysis, was only one part of a complex set of strategies to represent motherhood which also included social problematization, invisibilization, and empowerment. Representing Argentinian Mothers is an important contribution to the cultural and social history of gender, medicine and welfarism that further research in these areas should take as a starting point."
– Vanessa Höse (Universität zu Köln) in: Iberoamericana, XIV, 56 (2014).

"This book aims at connecting medicine, art, popular culture, gender, and ideology in modern Argentina. It does so displaying an intense use of discourses analysis. [...] While discussing some topics, and by crossing disciplinary boundaries in a very effective way, Representing Argentinian Mothers looks into new territories and makes a very creative use of both new and well-known sources. [...] Representing Argentinian Mothers is a valuable addition to the historiography of medicine in modern Latin America. Its effort to articulate an interdisciplinary reading of medicine, gender, society, and culture is commendable.">
– Diego Armus (Swarthmore College) in: Bulletin of the History of Medicine, Volume 89, Number 4, Winter 2015, pp. 828-829.
Abbreviations
List of Illustrations
Acknowledgements
Introduction

The Medical Record
Mothers and the First Medical Concerns
Towards a Taxonomy of Maternal Bodies: Biotypology, Eugenics and Argentine Nationalism (1930-1946)
The Textual Record
The Catholic Press and the Strategic Uses of the Marian Cult
The Liberal Press and the Political Uses of the Maternal
Fictionalised Mothers: Absence, Fear, and Rebellion in Literary Representations