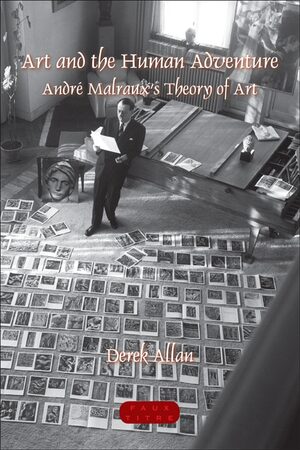 Art and the Human Adventure

Series:  Faux Titre Online, Volume: 341 and  Faux Titre, Volume: 341
Author: Derek Allan
André Malraux was a major figure in French intellectual life in the twentieth century. A key component of his thought is his theory of art which presents a series of fundamental challenges to traditional explanations of the nature and purpose of art developed by post-Enlightenment aesthetics. For Malraux, art – whether visual art, literature or music – is much more than a locus of beauty or a source of “aesthetic pleasure”; it is one of the ways humanity defends itself against its fundamental sense of meaninglessness – one of the ways the “human adventure” is affirmed.
Here for the first time is a comprehensive, step by step exposition, supported by illustrations, of Malraux’s theory of art as presented in major works such as The Voices of Silence and The Metamorphosis of the Gods. Suitable for both newcomers to Malraux and more advanced students, the study also examines critical responses to these works by figures such as Maurice Merleau-Ponty, Maurice Blanchot, Pierre Bourdieu, and E. H. Gombrich, and compares Malraux’s thinking with aspects of contemporary Anglo-American aesthetics. The study reveals that an account of art which Gombrich once dismissed as “sophisticated double-talk” is in reality a thoroughly coherent and highly enlightening system of thought, with revolutionary implications for the way we think about art.
E-Book (PDF)

$118.00
​
Add to Cart
List of illustrations
Acknowledgements
English translations of titles of Malraux’s works
Introduction
The Years before 1934
The Human Adventure
Art: A Rival World
Art and Creation
The Emergence and Transformation of “Art”
Art and Time
The First Universal World of Art
The Anti-Arts
Art, History, and the Human Adventure
Conclusion
Bibliography
Index