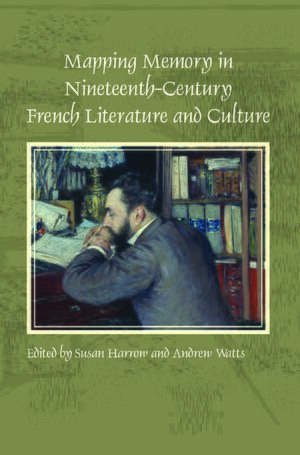 Series:  Faux Titre Online, Volume: 369 and  Faux Titre, Volume: 369
Volume Editors: Susan Harrow and Andrew Watts
Memory and memory studies have shaped a major site of humanities research over the last twenty years. Examined by ethnographers, archaeologists, social scientists, historians, economists, archivists, art historians, and literary scholars, the theme of memory – individual memory and memoir, collective memory, official memory and oral memory, cultural memory and popular memory – has informed academic discourse and formed institutional structures. Yet, the matter of memory is, paradoxically, under-explored in studies of the ‘long nineteenth century’ in France. Mapping Memory in Nineteenth-Century French Literature and Culture focuses critical attention on that neglected century when France was struggling to negotiate the serially renewed memory of revolutionary turmoil and socio-cultural redefinition. This volume explores the spaces that the memory process claims and shapes, and it works to identify the crosscurrents that connect those spaces. It asks how memory resists – or cedes to – colonisations by authority, by official discourse, by history, and by aesthetics. It asks how memory-work coincides with or morphs into the processes of the imagination. Eschewing diachronic approaches, the contributors to this volume explore sites around which memory is concentrated or which it shapes and informs: Memory on the Street; Sites of National Memory; Metamorphoses: Memory and Literary Practice; and Memory’s Imaginary Spaces.
E-Book (PDF)