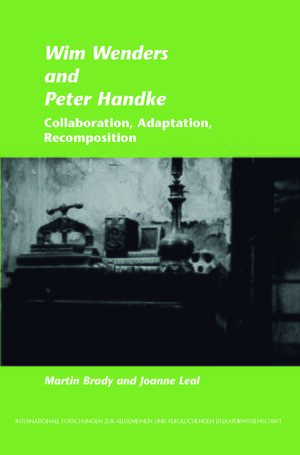 Authors: Martin Brady and Joanne Leal
This is the first volume in English to examine in detail one of the most remarkable collaborations between a writer and filmmaker in European cinema. Focusing on the four films Wim Wenders and Peter Handke made between 1969 and 1987 ( 3 American LPs, The Goalkeeper’s Fear of the Penalty, Wrong Move, and Wings of Desire), it explores the productive tension between adaptation and collaboration and demonstrates the different ways in which text- and image-makers can recompose film’s constituent media (literature, still and moving images, music, drama). The study reveals that this partnership had significant aesthetic and conceptual repercussions for both artists, resulting in a series of single-authored works which manifest the same kinds of intertextuality and disjunctive intermediality that are the hallmark of the collaborations themselves. These include Wenders’s Alice in the Cities, Handke’s films The Chronicle of On-Going Events and The Left-Handed Woman , and his novels Short Letter, Long Farewell and A Moment of True Feeling. While the Wenders-Handke partnership is unique, it contributes to a broader understanding of cinematic adaptation and different models of intermedial collaboration. This volume will be of interest to those working in the fields of Adaptation, Film, and German Studies.
E-Book (PDF)

€86.00$109.00
​
Add to Cart
Acknowledgements
Authors’ Note
Introduction
Politics, Poetics, Film: The Beginnings of a Collaboration
Parallel Texts: Language into Image in The Goalkeeper’s Fear of the Penalty
Accompanied by Text: From Short Letter, Long Farewell to Alice in the Cities
Mute Stories and Blind Alleys: Text, Image, and Allusion in Wrong Move
Leafing through Wings of Desire
Conclusion
Filmographies
Bibliography
Index