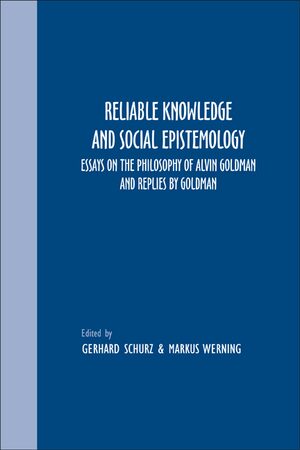 Essays on the Philosophy of Alvin Goldman and Replies by Goldman

Editors: Gerhard Schurz and Markus Werning
This special issue documents the results of a workshop on and with Alvin Goldman at the University of Düsseldorf in May, 2008. The topic was Reliable Knowledge and Social Epistemology. The volume contains the written versions of all papers given at the workshop, divided into five chapters and followed by Alvin Goldman’s replies in the sixth and final chapter.
The contributions of the first chapter (E. Brendel, C. Jäger, and G. Schurz) address general questions of social epistemology, veritism and externalism, including critical reflections on Goldman's notion of 'weak knowledge'. The subsequent chapter (T. Grundmann and P. Baumann) examines problems which are involved in the search for an adequate explication of reliabilism. In the third chapter, E. Olsson, J. Horvath, C. Piller and M. Werning discuss Goldman and Olsson's account of the problem of the value of knowledge. In the fourth chapter (M. Baurmann & G. Brennan, and O. Scholz) two specific aspects of the social dimension of knowledge are investigated: the relation between knowledge and democracy as well as the definition and recognition of expertise. The fifth chapter (A. Newen & T. Schicht) discusses another part of Goldman’s cognitive epistemology, namely his simulation theory of mindreading.
Goldman gives detailed replies to all parts of the papers in the final chapter. He thereby clarifies the many aspects of his philosophy and proposes amendments of earlier positions of his.
Paperback

€81.00$103.00
Paperback
Add to Cart
Introduction Veritism, Externalism and Strong versus Weak Knowledge: General Reflections on Goldman’s Social Epistemology Elke Brendel: Truth and Weak Knowledge in Goldman’s Veritistic Social Epistemology Christoph Jäger: Why to Believe Weakly in Weak Knowledge: Goldman on Knowledge as Mere True Believe Gerhard Schurz: Meliorative Reliabilist Epistemology: Where Externalism and Internalism Meet Problems of Reliabilism Thomas Grundmann: Reliabilism and the Problem of Defeaters Peter Baumann: Reliabilism—Modal, Probabilistic or Contextualist The Value of Knowledge Erik J. Olsson: In Defense of the Conditional Probability Solution to the Swamping Problem Joachim Horvath: Why the Conditional Probability Solution to the Swamping Problem Fails Christian Piller: Reliabilist Responses to the Value of Knowledge Problem Markus Werning: The Evolutionary and Social Preference for Knowledge: How to Solve Meno’s Problem within Reliabilism Problems of Social Knowledge Michael Baurmann & Geoffrey Brennan: What Should the Voter Know? Epistemic Trust in Democracy Oliver R. Scholz: Experts: What They Are and how We Recognize Them—A Discussion of Alvin Goldman’s Views Understanding Other Minds Albert Newen and Tobias Schlicht: Understanding Other Minds: A Criticism of Goldman’s Simulation Theory and an Outline of the Person Model Theory The Philosopher Replies Alvin I. Goldman: Replies to Discussants