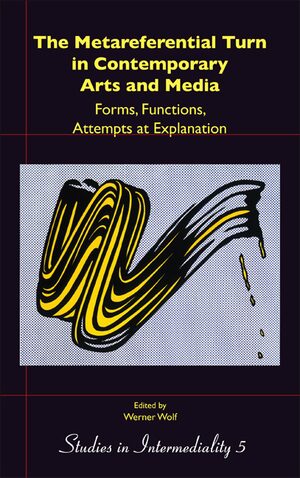 The Metareferential Turn in Contemporary Arts and Media

Author: Werner Wolf
One possible description of the contemporary medial landscape in Western culture is that it has gone ‘meta’ to an unprecedented extent, so that a remarkable ‘meta-culture’ has emerged. Indeed, ‘metareference’, i.e. self-reflexive comments on, or references to, various kinds of media-related aspects of a given medial artefact or performance, specific media and arts or the media in general is omnipresent and can, nowadays, be encountered in ‘high’ art and literature as frequently as in their popular counterparts, in the traditional media as well as in new media. From the Simpsons, pop music, children’s literature, computer games and pornography to the contemporary visual arts, feature film, postmodern fiction, drama and even architecture – everywhere one can find metareferential explorations, comments on or criticism of representation, medial conventions or modes of production and reception, and related issues. Within individual media and genres, notably in research on postmodernist metafiction, this outspoken tendency towards ‘metaization’ is known well enough, and various reasons have been given for it. Yet never has there been an attempt to account for what one may aptly term the current ‘metareferential turn’ on a larger, transmedial scale. This is what The Metareferential Turn in Contemporary Arts and Media: Forms, Functions, Attempts at Explanation undertakes to do as a sequel to its predecessor, the volume Metareference across Media (vol. 4 in the series ‘Studies in Intermediality’), which was dedicated to theoretical issues and transhistorical case studies. Coming from diverse disciplinary and methodological backgrounds, the contributors to the present volume propose explanations of impressive subtlety, breadth and depth for the current situation in addition to exploring individual forms and functions of metareference which may be linked with particular explanations. As expected, there is no monocausal reason to be found for the situation under scrutiny, yet the proposals made have in their compination a remarkable explanatory power which contributes to a better understanding of an important facet of current media production and reception. The essays assembled in the volume, which also contains an introduction with a detailed survey over the possibilities of accounting for the metareferential turn, will be relevant to students and scholars from a wide variety of fields: cultural history at large, intermediality and media studies as well as, more particularly, literary studies, music, film and art history.
E-Book (PDF)

€162.00$206.00
​
Add to Cart
Preface
Introduction
Werner Wolf: Is There a Metareferential Turn, and If So, How Can It Be Explained?
Literature and Other Media
Andreas Mahler: Writing on the Writer’s Block: Metaization and/as Lack of Inspiration
Sonja Klimek: Fantasy Fiction in Fantasy Fiction: Metareference in the Otherworld of the Faërie
John Pier: Intermedial Metareference: Index and Icon in William Gass’s Willie Masters’ Lonesome Wife
Wolfgang Funk: The Quest for Authenticity: Dave Eggers’s A Heartbreaking Work of Staggering Genius between Fiction and Reality
Christine Schwanecke: Metareference in Marianne Wiggins’s Literary Photo-Text The Shadow Catcher and Other Novels Referring to the Photographic Medium
Grzegorz Maziarczyk: Print Strikes Back: Typographic Experimentation in Contemporary Fiction as a Contribution to the Metareferential Turn
Alexander Starre: The Materiality of Books and TV: House of Leaves and The Sopranos in a World of Formless Content and Media Competition
Doris Mader: ‘Come on, Tell the Story. Describe his State of Mind’: Metaization in Peter Nichols’s Dramatic and Theatrical Vivisection A Piece of My Mind
Visual Arts and Related Media
Pamela C. Scorzin: Metascenography: On the Metareferential Turn in Scenography
Claus Clüver: On Modern Graffiti and Street Murals: Metareferential Aspects of Writings and Paintings on Walls
Katharina Bantleon: From Readymade to ‘Meta²’: Metareference in Appropriation Art
Film and Television
Dagmar Brunow: Deconstructing Essentialism and Revising Historiography: The Function of Metareference in Black British Filmmaking
Nicholas de Villiers: Metahorror: Sequels, ‘The Rules’, and the Metareferential Turn in Contemporary Horror Cinema
Michael Fuchs: Starring Porn: Metareference in Straight Pornographic Feature Films
Irina O. Rajewsky: ‘Metatelevision’: The Popularization of Metareferential Strategies in the Context of Italian Television
Erwin Feyersinger: The (Meta-)Metareferential Turn in Animation
Henry Keazor: “The Stuff You May Have Missed”: Art, Film and Metareference in The Simpsons
Music
Walter Bernhart: Metareference in Operatic Performance: The Case of Katharina Wagner’s Die Meistersinger von Nürnberg
Martin Butler: Making Sense of the Metareferential Momentum in Contemporary Popular Songs
Tobias Janz: Goodbye 20th Century: Sonic Youth, John Cage’s ‘Number Pieces’ and the Long Farewell to the Avant-Garde
Other Media
Jeff Thoss: “This Strip Doesn’t Have a Fourth Wall”: Webcomics and the Metareferential Turn
Roy Sommer: ‘Metadesign’: A ‘Mythological’ Approach to Self-Reference in Consumer Culture
Notes on Contributors
Index