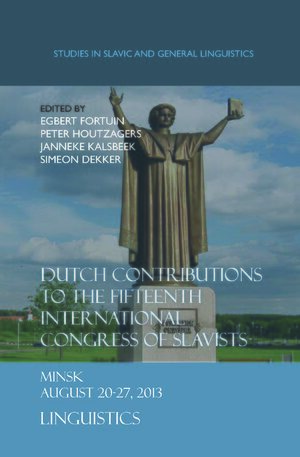 Dutch Contributions to the Fifteenth International Congress of Slavists

Editors: Egbert Fortuin, Peter Houtzagers, Janneke Kalsbeek and Simeon Dekker
This volume, Dutch Contributions to the Fifteenth International Congress of Slavists (Minsk, 2013) presents a comprehensive overview of current Slavic linguistic research in the Netherlands, and covers its various linguistic disciplines (both synchronic and diachronic linguistics, language acquisition, history of linguistics) and subdomains (phonology, semantics, syntax, pragmatics, text). The different chapters in this peer-reviewed volume show the strong data-oriented tradition of Dutch linguistics and focus on various topics: the use of imperative subjects in birchbark letters (Dekker), the existential construction in Russian (Fortuin), Jakovlev’s formula for designing an alphabet with an optimal number of graphemes (Van Helden), frequency effects on the acquisition of Polish and Russian nominal flexion paradigms (Janssen), Macedonian verbal aspect (Kamphuis), the concept of ‘communicatively heterogeneous texts’ in connection with three birchbark letters from medieval Rus’ (Schaeken), a philological analysis of the authorship of some Cyrillic manuscripts (Veder), a reconstruction of the evolution of the Slavic system of obstruents: the motivation of mergers and the rise of dialect differences (Vermeer), and a contrastive analysis of Russian delat’ and Dutch doen (Honselaar and Podgaevskaja). With a well-known cast of contributors, this reference work will be of interest to researchers in both Slavic and general linguistics.
E-Book