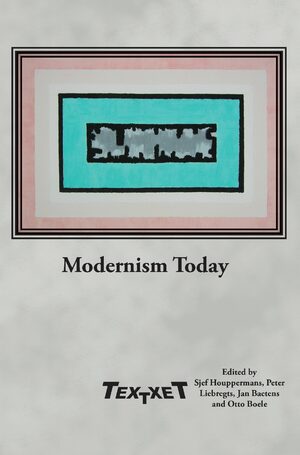 Editors: Sjef Houppermans, Peter Liebregts, Jan Baetens and Otto Boele
This book manifests at least four recent shifts and tendencies within Modernist studies in general that point at the expansion of this increasingly interdisciplinary field. First, Modernist studies has seen a temporal expansion, to the extent that scholars in the field have come to turn to both the pre- and posterior history of Modernism. Second, the field has witnessed a spatial expansion, in that increasingly so researchers have also come to scrutinize the Modernisms of regions at the fringes of Europe, and beyond. Thirdly, a vertical expansion too has marked Modernist studies in recent decades, not only by further expanding the canon of women writers and exploring the continuum between high- and lowbrow, but also by looking at the artistic and mediatized hierarchies and cross-fertilizations operative in the period. A fourth conceptual expansion of the field shows that whereas concepts such as “middlebrow”, “arrière-garde”, and to some extent even “avant-garde”, were once exotic notions of at best marginal importance in European Modernist studies, they now form part and parcel of the field, complicating and expanding it conceptually.
E-Book (PDF)

€85.00$107.00
​
Add to Cart
Sascha Bru and Dirk de Geest: What Modernism Was and Is: By Way of an Introduction
Hans Bertens: Towards Modernism
Peter Liebregts: “The World Is a Fine Adventurous Place”: Graham Greene in the 1930s
Sjef Houppermans: Sorties or Entrenchment: Roussel, Crevel and Aragon between Avant-garde and Arrière-garde
Jacqueline Bel: Intellectual Scepticism versus Avant-garde Bragging: Modernism in Dutch Literature
Geert Buelens: “The Final Catholic”: Paul van Ostaijen, and the Catholic Réveil around the First World War
Koen Rymenants, Tom Sintobin and Pieter Verstraeten: Arrière-garde Perspectives on the History of Modern Literature: The Case of the Netherlands (1880-1940)
Arthur Langeveld: How Modernism Disappeared from Fedor Gladkov’s Cement between 1924 and 1958
Otto Boele: Biocosmism and the Russian Avant-garde: A Literary Cul-de-sac or the Road to Immortality?
Paulo de Medeiros: Ten Times Pessoa
Hero Hokwerda: Modernism in Greek Literature (1910-1940)
Jan Baetens: Fun Home: Ithaca, Pennsylvania
Peter Verstraten: A Modernist “Attempt at Cinema”: The “Impurity” of Pierrot le Fou
Peter de Voogd: Modernism and the Art of Printing: transition and Carolus Verhulst
Marcel Cobussen: The (Post)Modern Music of Edgard Varèse
Notes on Contributors
Index