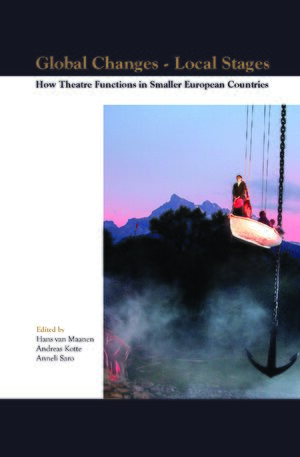 Series:  Themes in Theatre, Volume: 5
Volume Editors: Hans van Maanen, Andreas Kotte, and Anneli Saro
Global Changes - Local Stages investigates the relationships between what happened the last twenty years on the ‘world stage’ and how theatre life developed on the local level.
The subject has been approached from three different angles, each covered by one part of the book: “The Effects of Social Changes on Theatre Fields”, “Values in Theatre Politics” and “Localization of Theatrical Values”. The group of authors tries to find the links between these three areas.
The book profits from the fact that the authors come from two sides of the former ‘Wall’. Twenty years after its fall, the transitional processes in countries of the former ‘Eastern Bloc’ can be compared, not only mutually, but also with the changes in the Western part of Europe.
With its 537 pages Global Changes - Local Stages is the most extensive research of the possible relationships between cultural change, theatre politics and theatre life in smaller European countries.
E-Book (PDF)