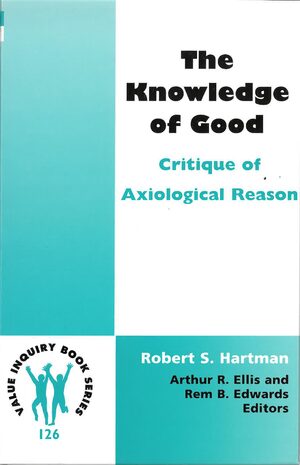 The Knowledge of Good

€135.00$171.00
Hardback
Add to Cart
ROBERT S. HARTMAN was Research Professor of Philosophy at The University of Tennessee and at the National University of Mexico when he died on September 20, 1973. He attended the German College of Political Science, the University of Paris, the London School of Economics, and Berlin University, where he received he LL.B. in 1932. Hartman’s rejection of Fascism brought him into conflict with the Nazi party and forced him to leave Germany, using a fake passport, in 1932. He legally changed his name, which originally was Robert Schirokauer, to the name on his passport, Robert S. (for Schirokauer) Hartman. In 1938, using a Swedish alien’s passport, he, his wife, and son left Europe for Mexico, where they lived until their immigration in 1941 to the United States, where they later became citizens. Hartman’s formal axiology, as the ordering logic for the value sciences, was developed in many published articles and received its most complete expression in his major work, The Structure of Value: Foundations of Scientific Axiology (1967). In the field of psychology he applied formal axiology in “The Hartman Value Profile,” a value test widely used in Mexico and by psychiatrists, psychologists, and business consultants in the United States. Since Hartman’s untimely death, his work has been carried on by members of the Robert S. Hartman Institute.
ARTHUR R. ELLIS is a Licensed Professional Counselor who has been a clinician since 1971. He holds degrees in psychology (B.S.) and rehabilitation counseling (M.S.) from the University of Tennessee at Knoxville, and counseling (Ph.D.) from LaSalle University. Since 1976, he has worked in the Psychology Service of a Veterans Affairs Medical Center. He studied formal axiology under Robert S. Hartman, who personally trained him in the use and interpretation of the “Hartman Value Profile”. His research has included explorations of the value patterns of alcoholics. Dr. Ellis has been an active member of the Robert S. Hartman Institute for Formal and Applied Axiology. Dr. Ellis is a Master Addictions Counselor, a Diplomate of the American Psychotherapy Association, and a Professional Member of the American Mental Health Counselors Association.
REM B. EDWARDS received his A.B. degree from Emory University in 1956, where he was elected to Phi Beta Kappa. During graduate school he was a Danforth Graduate Fellow. He received a B.D. degree from Yale University Divinity School in 1959 and a Ph.D. from Emory University in 1962. His areas of specialization are Philosophy of Religion, American Philosophy, Ethical Theory, Medical Ethics with a special interest in Mental Health Care, Ethics and Animals, and Formal Axiology. He is the author or editor of sixteen books. Edwards is also the author of over sixty articles and reviews. He is an Associate Editor with the Value Inquiry Book Series, published by Editions Rodopi, where he is responsible for the Hartman Institute Axiological Studies special series. For a number of years he was co-editor of the Advances in Bioethics book series (JAI Press). Edwards has been the President of the Tennessee Philosophical Association (1973–1974), the Society for Philosophy of Religion (1981–1982), and the Southern Society for Philosophy and Psychology (1984–1985). He is a Charter Member and Fellow of the Robert S. Hartman Institute for Formal and Applied Axiology.
Rem B. Edwards : Editorial Foreword Acknowledgments Part I: The Order of Value Reason ONE The Knowledge of Value TWO The Levels of Value Language THREE: Value Science and Natural Science FOUR: Moore’s Metaethics: The Science of Good Part II: Reason and Reasons of Value FIVE: Non-Cognitivists and Semi-Cognitivists SIX: Naturalistic Cognitivists SEVEN: Non-Naturalistic Cognitivists Part III: The Value of Reason EIGHT: The Axiological Value of Reason NINE: The Symbolization of Value TEN: The Measurement of Value ELEVEN: The Formalization of Value Notes Bibliography About the Author and the Editors Index