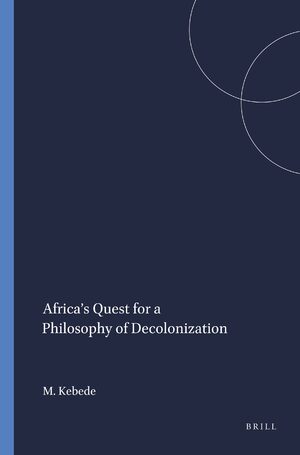 Africa’s Quest for a Philosophy of Decolonization

Author: Messay Kebede
This book discovers freedom in the colonial idea of African primitiveness. As human transcendence, freedom escapes the drawbacks of otherness, as defended by ethnophilosophy, while exposing the idiosyncratic inspiration of Eurocentric universalism. Decolonization calls for the reconnection with freedom, that is, with myth-making understood as the inaugural act of cultural pluralism. The cultural condition of modernization emerges when the return to the past deploys the future.
E-Book (PDF)

€71.00$90.00
​
Add to Cart
Messay Kebede is Associate Professor of Philosophy at the University of Dayton in Ohio. He obtained his Ph.D. from the University of Grenoble in France. He previously taught philosophy at Addis Ababa University (Ethiopia). He is the author of two books, Meaning and Development (Rodopi, 1994) and Survival and Modernization (Red Sea, 1999). He has also published numerous articles. The most recent include: “The Rehabilitation of Violence and the Violence of Rehabilitation: Fanon and Colonialism” ( Journal of Black Studies, 2001), “Directing Ethnicity toward Modernity” ( Social Theory and Practice, 2001), and “Generational Imbalance and Disruptive Change” ( International Journal of Applied Philosophy, 2003).
”No doubt, Africa’s Quest for a Philosophy of Decolonization is an in-depth study on the African personality. In a refreshing way, it provides an insight into the intellectual pre-requisites for the resolution of the problem of underdevelopment of Africa. … The book is a worthy contribution to the debate about the future of Africa, not only in philosophical terms, but also about the development problematic of the continent. The book will certainly be useful to both undergraduate and graduate students of philosophy, sociology, political science and anthropology. It should also serve as a guide to other academics and politicians interested in issues of emancipation and development, within and outside the African continent.” in: African Studies Quarterly, Vol. 8, Issue 4, Summer 2006
“distilling wide ranging and profound analyses of thought, African and European, into a lucid prose free of jargon. … It is the proper knowledge of Africa that is emerging. Kebede’s book has a lot to contribute to that knowledge.” in: H-Net Reviews in the Humanities & Social Sciences (published by H-Africa), April, 2005
“Kebede (Dayton) positions this important contribution on the status of ethnophilosophy within the context of how best to emancipate African philosophy from Western domination. His well-stated argument regarding the strategic importance of negritude’s appropriation-of-otherness mythmaking as counter as counter to Western whiteness propaganda sets the stage for his own view of the role of cultural traditions and mysticism in the modernization of Africa. … Jam packed with issues and citations, each chapter is a literature survey that could be expanded into a book. … Recommended.” in: CHOICE, Vol. 42, No. 5, January 2005
“If you have time to read only one book to learn about the intricacies of African philosophy, then read Africa’s Quest for a Philosophy of Decolonization. The beauty of this volume is Kebede’s clear presentation and thoughtful evaluation of each of the main schools in African Philosophy.” – Joseph C. Kunkel, University of Dayton
“ Africa’s Quest for a Philosophy of Decolonization is an exceptionally clear introduction to African philosophy.” in: Filosofie Magazine
Editorial Forward
Acknowledgments
ONE Western Discourses on Africa
1. The Invention of the “White Man”
2. Western Attempts to Make Sense of Africa
TWO Between Evolutionism and Pluralism: Tempes’s Path to Human Sameness
1. Logic and Conversion
2. Mysticism and Rationality
3. Getting Over Evolutionism: Evangelization as Purification
4. Beyond Evolutionism and Relativism
THREE The Holy Grail of Otherness
1. The Complementariness of Otherness: Negritude and the Idea of Race
2. Past-Oriented Temporality and Otherness: The Case of Mbiti
FOUR Sameness versus Otherness
1. Myth and Reality in African Philosophy
2. Philosophic Sagacity
3. Fanon and the Rehabilitation through Violence
FIVE Particularism versus Otherness
1. Diop and the Stolen Legacy
2. Traditionality in lieu of Otherness
3. From Otherness to Historicity: Hermeneutical School
4. The Primacy of Deconstruction
SIX The Future as Forward Movement into the Past: The Constructedness of Identity
1. The Return to the Past
2. Questioning the Conflict between Tradition and Modernity
3. Postmodernist Approaches to African Identity
4. Myth-Making and Construction
5. African Attempts at Myth-Making
SEVEN Colonization without Colonizers: The Phenomenon of African Elitism
1. From Colonialism to Elitism
2. The Elitist Drift of Ethnophilosophy
3. Power as Tutorship
EIGHT Ethnicity and State Formation: The Mystical Root of Nationhood
1. Ethnicity and the African Philosophical Debate
2. Primordialism and the Naturalness of Ethnicity
3. Instrumentalism and the Constructedness of Ethnic Identities
4. Ethnicity and the Legitimacy of the State
5. From Ethnicity to Nation-State: The Mystical Moment
NINE Harnessing Myth to Rationality
1. The African Dilemma
2. The Complementarity of Myth and Rationality
3. The Particularism of Freedom
Notes
Bibliography
About the Author
Index