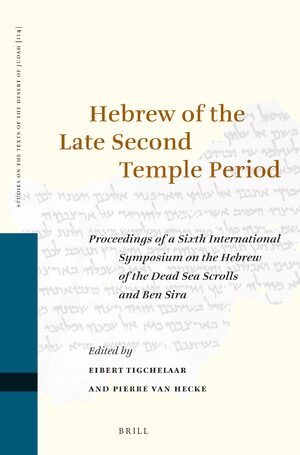 Editors: Eibert J.C. Tigchelaar and Pierre van Hecke
The Hebrew of the Late Second Temple Period is directly attested in the Scrolls from Qumran and other manuscripts discovered in the Judaean Desert. Indirectly, it is also found in some manuscripts copied in later times, which still preserve linguistic elements of the Hebrew from the period in which the texts were authored. Often referred to as the Hebrew of the Dead Sea Scrolls or Qumran Hebrew, and positioned chronologically between Biblical Hebrew and Mishnaic Hebrew, its nature remains disputed. Some essays in this volume deal with linguistic and philological problems of this Late Second Temple Period Hebrew. Other papers discuss the nature and linguistic profile of the Hebrew of the Dead Sea Scrolls.
E-Book (PDF)

€101.00$134.00
​
Add to Cart
Eibert Tigchelaar, Ph.D. 1994 Groningen, is Professor of Biblical Studies at the K.U. Leuven. He has published extensively on the Dead Sea Scrolls, is the editor of the Journal for the Study of Judaism, and co-editor of The Dead Sea Scrolls Study Edition (Brill).

Pierre Van Hecke, Ph.D. (2000) in Oriental Studies, K.U.Leuven, Belgium and Ph.D. (2006) in Theology, Tilburg University, The Netherlands, is Professor of Languages and Cultures of Syria-Palestine, and of Hebrew Bible at K.U.Leuven. He has published on biblical metaphor, on Hebrew linguistics and on the book of Job.
Chanan Ariel and Alexey (Eliyahu) Yuditsky, Remarks on the Language of the Pesher Scrolls
Steven E. Fassberg, The Nature and Extent of Aramaisms in the Hebrew Dead Sea Scrolls
Jan Joosten, The Tiberian Vocalization and the Hebrew of the Second Temple Period
Noam Mizrahi, Priests of Qoreb: Linguistic Enigma and Social Code in the Songs of the Sabbath Sacrifice
Uri Mor and Tamar Zewi, The Nominal Clause in the Hebrew Legal Documents and Letters from the Judean Desert
Takamitsu Muraoka, Aspects of the (Morpho)syntax of the Infinitive in Qumran Hebrew
Jacobus A. Naudé and Cynthia L. Miller-Naudé, Syntactic Features of כל in Qumran Hebrew
Wido van Peursen, Linguistic Observations on the Hebrew Prayer of Manasseh from the Cairo Genizah
Gary A. Rendsburg, The Nature of Qumran Hebrew as Revealed through Pesher Habakkuk
Jean-Sébastien Rey, “Dislocated Negations”: Negative אל Followed by a Non-verbal Constituent in Biblical, Ben Sira and Qumran Hebrew
Francesco Zanella, Some Semantic Notes on the Lexeme מדהבה in the DSS

Scholars interested in Hebrew linguistics and philology; biblical and religious studies scholars with an interest in the Dead Sea Scrolls.