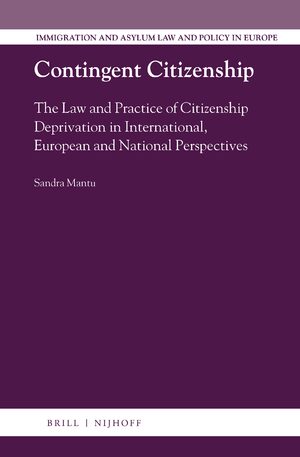 The Law and Practice of Citizenship Deprivation in International, European and National Perspectives

Author: Sandra Mantu
In Contingent citizenship, Sandra Mantu examines the changing rules of citizenship deprivation in the UK, France and Germany from the perspective of international and European legal standards. In practice, two grounds upon which loss of citizenship takes place stand out: fraud in the context of fraudulent acquisition of nationality and terrorism in the context of national security. Newly naturalised citizens and citizens of immigrant origin are mainly targeted by these measures. The resurrection of the importance attached to loyalty as the citizen’s main duty towards his/her state shows that the rules on loss of citizenship are capable of expressing ideals of membership and identity, while the citizenship status of certain citizens remains contingent upon meeting these ideals.
E-Book