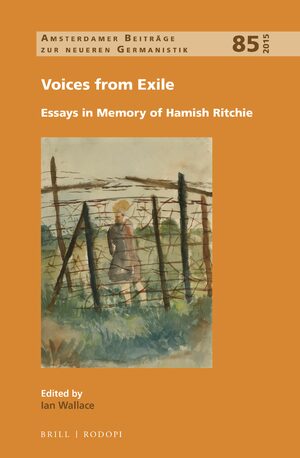 Essays in Memory of Hamish Ritchie

Editor: Ian Wallace
The sixteen essays in this volume are a tribute to Hamish Ritchie’s deep interest in exile as a literary and historical phenomenon. The first eight focus on the British and Irish context, including studies of Jürgen Kuczynski and his family, Martin Miller, Lilly Kann, Hermann Sinsheimer, Albin Stuebs, Ludwig Hopf and Paul Bondy, as well as contributions on the Association of Jewish Refugees and the exile experience as reflected in Klaus Mann’s Der Vulkan. The following four contributions widen the discussion to encompass Germany, the Netherlands, Austria and Yugoslavia by focusing on the diaries of Anne Frank and Etty Hillesum, the early poetry of Bertolt Brecht, and works by Vladimir Vertlib, Aleksandar Ajzinberg, and David Albahari. The historical dimension is deepened with contributions on William Joyce, Joseph Jonas, the marginalisation of the mass emigration of the Jews within German memory, and the ‘exile’ of princesses for whom until recent times marriage often meant a life far from home.
E-Book

€65.00$86.00
​
Add to Cart
Ian Wallace is Emeritus Professor of German at the University of Bath, UK. His principal research interests and publications are in the fields of GDR literature and German literary exile. Recent book publications include Feuchtwanger and Remigration (ed. 2013) and Vision and Reality (co-ed. with Richard Dove 2014). In 1979 he founded the series GDR Monitor (later renamed German Monitor) and was its editor until 2008. He has been President of the International Feuchtwanger Society since it was founded in 2001. He is also a member of the Editorial Board of the Yearbook of the Research Centre for German and Austrian Exile Studies (London).
Table of Contents