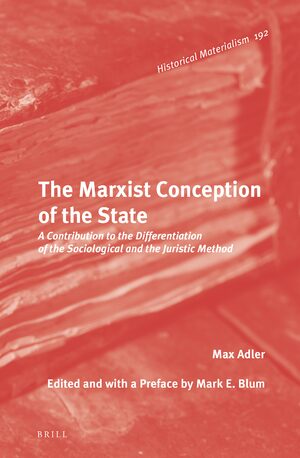 The Marxist Conception of the State

Series:  Historical Materialism Book Series, Volume: 192
Editor: Mark E. Blum
Author: Max Adler
This translation of Max Adler’s Die Staatsauffassung des Marxismus enables English readers to know a significant perspective on Marx’s theory of the state, which was central to the interwar period in which he was writing (1922). In an extended dialogue with democratic jurist Hans Kelsen, Adler shows that the so-called necessity of law as the neutral arbiter of a democratic society has been heretofore a flawed imposition of the authoritative understandings of the ruling classes. Adler’s brings to his argument the Kantian concept of “sociation”, where every human judgment perforce sets its determinations within its view of the social whole, demonstrating that an accurate comprehension of interdependent equality that realizes an objective “sociation” can only occur in a “classless” society.
E-Book (PDF)

€115.00$139.00
​
Add to Cart
Max Adler, born January 15, 1873 in Vienna, Austria, studied law at the University of Vienna. Renowned as a Neo-Kantian Marxist, he was active in Austrian Social Democracy as both a politician and theoretician until his death in 1937.

Mark E. Blum, Ph.D. (1970), University of Pennsylvania, is Professor of History at the University of Louisville. He has published monographs, translations and many articles on German and Austrian-German Marxists, including The Austro-Marxists 1890-1918, A Psychobiographical Study (University of Kentucky, 1985).
Preface by Mark E. Blum
Foreword
1 Politics and Sociology
2 The Sociological Unity of State and Society
3 The Development of the Concept of Society
4 The Further Development of the Concept of Society by Marx
5 The Formal Logic of Law in Kelsen
6 What is Essential in Marx’s Concept of the State
7 What is a Class?
8 Class and Party
9 Political and Social Democracy
10 Democracy and Freedom
11 Revolution or Evolution?
12 Democracy and Its Organisation
13 Dictatorship
14 Government and Administration
15 Excursus on Anarchism  1  The Denial of Force, Law and Authority  2  The Legal Order and the Conventional Order  3  The Real Difference between Anarchism and Socialism  4  Socialism and Individualism
16 Apparent Anarchism in Marxism  1  The Idea of Liberation  2  Political and Social Forces  3  The Destruction of the Machinery of the State  4  The Withering Away of the State
17 The ‘Marvel’ of the Stateless Organisation
18 Utopianism in Marx and Engels
19 Why We Are Not Understood!
Afterword
Bibliography Index
Readers will include undergraduate and graduate students in history, philosophy, and political science, as well as academics in these fields.