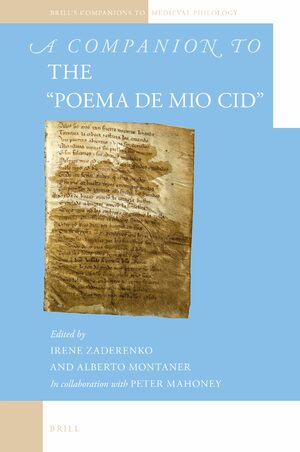 A Companion to the Poema de mio Cid

Editors: Irene Zaderenko and Alberto Montaner
This volume brings together a number of distinguished scholars in the field of Poema de mio Cid studies. It provides an informed introduction to key literary aspects of the poem, and thoroughly examines many of the complex issues that are crucial for a comprehensive understanding of the work (historical context, ideological motivations, prosification in medieval chronicles, the poem’s place in the canon of Spanish literature). Equally important are the new findings that have been put forward since the 1970s, when scholars started to challenge Ramón Menéndez Pidal’s theories that had dominated the philological discourse since the beginning of the twentieth century.
Contributors are Matthew Bailey, Simon Barton, Francisco Bautista, Juan Carlos Bayo Julve, Federico Corriente, Leonardo Funes, Luis Galván, Fernando Gómez Redondo, Eukene Lacarra Lanz, Salvatore Luongo, Georges Martin, Alberto Montaner, Javier Rodríguez Molina, Mercedes Vaquero, Roger Wright, and Irene Zaderenko.

'This volume provides a lively and necessary introduction to recent scholarly work on the poem [...] All in all, essays are clearly written and useful on their own, and function as excellent introductions to their authors' important work on the Poema de mio Cid from very different perspectives. But what is perhaps most satisfying is how the volume maps out areas of consensus and disagreement through the multifaceted dialogue between its contributions, which will stimulate further research'. Clara Pascual-Argente, in Bulletin of Spanish Studies , 6, July 2019.
Contents

Part 1: The Codex and the Author


Part 5: The Poema de mio Cid in the Cultural History of Spain

Medievalists in all fields (literature, history, art, religion, Spanish philology) as well as anyone eager to embark upon a critical reading of this literary classic.