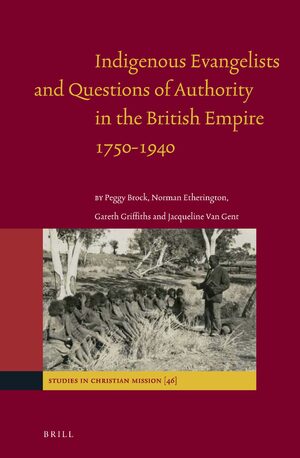 Editors: Peggy Brock, Norman Etherington, Gareth Griffiths and Jacqueline Van Gent
This is the first full-length historical study of indigenous evangelists across a range of societies, geographical regions and colonial regimes and the first to focus on the complex issues of authority surrounding the evangelists. It answers a need frequently voiced in recent studies of Christian missions. Most scholars now acknowledge that the remarkable expansion of Christianity in Africa, Asia and the Pacific in the nineteenth and twentieth centuries owed far more to the efforts of indigenous preachers than to the foreign missionaries who loom so large in publications. This book addresses that concern making an excellent introduction to the role of indigenous evangelists in the spread of Christianity, and the many countervailing pressures with which these individuals had to contend. It also includes in the introductory discussions useful statements of the current state of scholarship and theoretical debates in this field.
E-Book (PDF)

€122.00$160.00
​
Add to Cart
Peggy Brock is Emeritus of History at Edith Cowan University, Visiting Research Fellow at the University of Adelaide and Fellow of the Academy of Social Sciences in Australia. She has researched over many years Indigenous responses to colonialism, particularly in the mission context, in Australia, Canada and the Pacific region. Publications include The Many Voyages of Arthur Wellington Clah: A Tsimshian man on the Pacific Northwest Coast (2011) and Indigenous Peoples and Religious Change (ed) (2005).

Norman Etherington was educated at Yale University, is Emeritus Professor of History at the University of Western Australia and holds a research appointment in History at the University of South Africa. His books include Preachers, Peasants and Politics in Southeast Africa, Missions and Empire, Mapping Colonial Conquest: Australia and Southern Africa, and Theories of Imperialism; War Conquest and Capital. His more than fifty articles include contributions to the American Historical Review, The Journal of African History, Church History, History in Africa, Itinerario, and the Journal of Southern African Studies. He is a Fellow of the Academy of the Social Sciences in Australia, the Royal Geographical Society and the Royal Historical Society. He is a past president of the Australian Historical Society and the African Studies Association. In 2013 he was made a member of the Order of Australia (AM) for service to the discipline of history and the community.

Gareth Griffiths is Emeritus Professor of the University of Western Australia and a Professorial Fellow of the University of Wollongong. He has published extensively on postcolonial topics with an emphasis on Africa and Australasia. He has authored, co-authored and edited numerous books including The Empire Writes Back (1989) and African Literatures in English East and West (2000). His recent publication has focused on sacral/secular issues in post-colonial spaces including Mixed Messages: Materiality, Textuality and Missions edited with Jamie S, Scott (2005). He is currently co-editing a book on Narrative and Human Rights.

Jacqueline Van Gent, PhD (1999), The University of Western Australia, is a historian with special research interest in colonial encounters, gender, and mission histories. She has published on indigenous responses to Moravian and Lutheran missions. Her most recent book is Gender and Conversion Narratives in the Nineteenth Century: German Mission at Home and Abroad (Ashgate 2015) co-authored with K. Rüther and A. Schaser.

"Its approach and method are valuable not only in re-examining authority but also in providing a method of researching a subject that is either under-documented or documented mainly by western missionaries. (...) [it] develops the methodological approach for analysing indigenous agency and extends our knowledge of the men and women who adopted and adapted the Christian message in their milieu."
- Emma Wild-Wood, University of Cambridge, in The Journal of Ecclesiastical History Vol. 68.3 (2017).