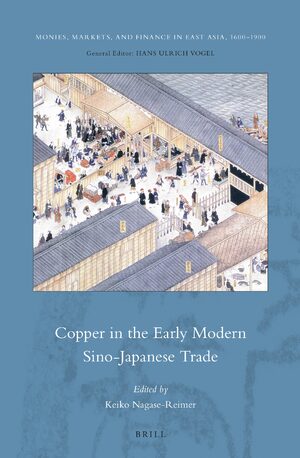 Volume Editor: Keiko Nagase-Reimer
This volume sheds light on the important role of copper in early modern Sino-Japanese trade. By examining the demand for copper and the policy on copper procurement in Japan and China as well as the role of Osaka merchant houses, this volume provides a new slant on the “life” of Japanese copper – from production and distribution to consumption. In addition, papers on other significant traded products such as sugar, seafood, and books give us a better understanding of Sino-Japanese trade overall. The latest discussions on this field, which were mostly published in Japanese, have been brought together in this book and made accessible to an English-speaking audience.
Contributors include: IMAI Noriko, IWASAKI Yoshinori, LIU Shiuh-Feng, MATSUURA Akira, and Keiko NAGASE-REIMER.
E-Book (PDF)

1 Introduction - Keiko Nagase-Reimer
2 Copper in Edo-Period Japan - Imai Noriko
3 The Akita Domain and Osaka Merchant Houses at the Time of the Establishment of the Meiwa Copper Agency - Iwasaki Yoshinori
4 “There’s Method in the Madness”: A New Approach to the Early Modern Sino-Japanese Copper Trade - Keiko Nagase-Reimer
5 Copper Administratioin Reform and Copper Imports from Japan in the Qianlong Reign of the Qing Dynasty - Liu Shiuh-Feng
6 The Trade in Dried Marine Products from Nagasaki to China during the Edo Period - Matsuura Akira
7 The Import of Chinese Sugar in the Nagasaki Junk Trade and Its Impact - Matsuura Akira
8 Imports and Exports of Books by Chinese Junks in the Edo Period - Matsuura Akira