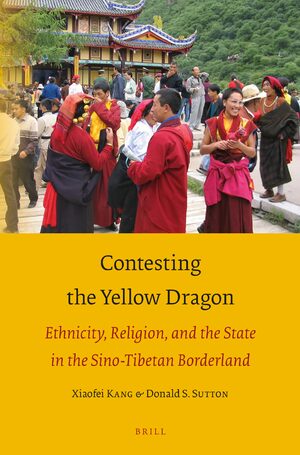 Ethnicity, Religion, and the State in the Sino-Tibetan Borderland, 1379-2009

Series:  Religion in Chinese Societies, Volume: 10
Authors: Xiaofei Kang and Donald S. Sutton
This book is the first long-term study of the cultural politics of the Sino-Tibetan frontier. Combining historical research and fieldwork, Xiaofei Kang and Donald Sutton examine northern Sichuan from early Ming through Communist revolution to the age of global tourism, tracing relationships and mutual influence among Tibetans, Chinese, Hui Muslims, Qiang and others over some 600 years. Their focus is on the old Chinese garrison city of Songpan and the nearby pilgrimage center of Huanglong, or Yellow Dragon. Declining to isolate religious from other social and political expressions, they demonstrate that in its many forms—popular and official, scriptural and unwritten, monastic, priestly and shamanic, personal and informal—religion has long been crucial in imagining, constructing and manipulating local social relations on this frontier. Bon and Buddhist sects sustained communities among Tibetan or proto-Tibetan populations; and Daoism and Chinese Buddhism (and for some, Islam) helped to establish frontier identities in a diverse population of migrants and soldiers. The Chinese state has contended with, exploited and at times tried to extinguish the soft power of religion in its long effort to dominate this region and (more recently) push it towards modernity. A Choice Outstanding Academic Title Winner for 2016 in the anthropology category
E-Book (PDF)

€40.00$49.00
​
Add to Cart
Xiaofei Kang received her Ph.D. from Columbia University. She is Associate Professor of Religion at the George Washington University. She has published on religion, ethnicity, tourism, and gender, including The Cult of the Fox: Power, Gender and Popular Religion in Late Imperial and Modern China (Columbia, 2006).

Donald Sutton (Ph.D. Cambridge) is Professor Emeritus of History and Anthropology at Carnegie Mellon University. He has published books on 20th century warlordism and popular religion in Taiwan, and numerous articles on the 18th century Miao in west Hunan and on ritual in past and recent Chinese societies.

"Contesting the Yellow Dragon presents a masterful account of the mutual accommodation between Tibetan and Chinese religious traditions in Southwest China as seen in the processes by which the scenic area of Huanglong was transformed into a World Heritage site. The authors vividly portray the paramount place of religion in Chinese life, which today encompasses roles played by tourists and local women. This book will be of tremendous benefit to scholars in fields like history, anthropology, religious studies, etc."
Paul R. Katz, Institute of Modern History, Academia Sinica

"[This volume] brings a much-needed investigation of the Sino-Tibetan area. [...] Groundbreaking and fascinating to scholars of religion as well as of culture, modern ecology, and tourism, this work serves as an important contribution to the understanding of relations between the areas and cultures of China."
Linda L. Lam-Easton, California State University, Northridge, Choice (January 2017)
Acknowledgments vii
List of Figures and Photographs x
Abbreviations xi
Note on Ming shilu and Qing shilu xii
Note on Tibetan Terms xiii
Introduction 1
1 Garrison City in the Ming: Indigenes and the State in Greater Songpan 16
2 Qing Songpan: Recovery, Over-extension and Disaster 69
3 Guns, Gold, Gown, and Poppy: Ethnic Frontier in a Failing Republic 123
4 Sharing a Sacred Center: Conch Mountain of the East, Yellow Dragon, and Chinese and Tibetan Culture 171
5 Songpan, the State and Social Revolution, 1950–78 223
6 Opening Up the Borderland I: The Politics of Tourist Development and Environmental Protection 277
7 Opening Up the Borderland II: Ethnicity for Tourists 311
8 Contesting the Yellow Dragon in the Age of Reform: Local Initiatives and Responses 334
9 Ethnoreligion, Ethnic Identity and Regional Consciousness at Songpan 375
Conclusion 410
Bibliography 425
Appendix: Religious Activities in the Songpan Region 457
Tibetan Glossary 468
Index 471