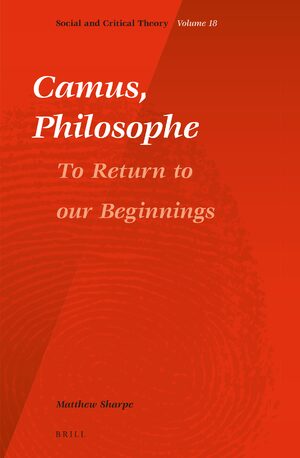 To Return to our Beginnings

Author: Matthew Sharpe
Camus, Philosophe: To Return to our Beginnings is the first book on Camus to read Camus in light of, and critical dialogue with, subsequent French and European philosophy. It argues that, while not an academic philosopher, Albert Camus was a philosophe in more profound senses looking back to classical precedents, and the engaged French lumières of the 18th century. Aiming his essays and literary writings at the wider reading public, Camus’ criticism of the forms of ‘political theology’ enshrined in fascist and Stalinist regimes singles him out markedly from more recent theological and messianic turns in French thought. His defense of classical thought, turning around the notions of natural beauty, a limit, and mesure makes him a singularly relevant figure given today’s continuing debates about climate change, as well as the way forward for the post-Marxian Left.

€41.00$42.00
​
Add to Cart
Dr Matthew Sharpe teaches philosophy at Deakin University. He is the author of many articles, magazine pieces and book chapters on critical theory, psychoanalysis, modern receptions of ancient thought, and Camus’ work.
"In sum, Sharpe makes a strong argument for the continuing vitality of Camus' thought, that his is a well-deserved renaissance. Sharpe's text would be a useful addition to any undergraduate or graduate library as a superb summary of current Camus scholarship and trends." -David Stegall, Clemson University, Notre Dame Philosophical Reviews (2016.02.10)

“This book has helped me understand the place in which I live and my place in it… Sharpe’s book demonstrates that Camus’ oeuvre is a move from an individual philosophy of individual mesure (the Myth of Sisyphus), where the absurd is more like a humility before nature than an undermining of rationality, to a philosophy of community which uses the permanence of nature to limit the ability of hegemony, history et al to impose barbaric political reality on its citizens. Mesure is what allows us to come closer to the concepts which stand outside of the historicst reductive readings of mankind.” --Dr Daniel Brennan, Bond University

“This is a great book, showing a love of wordplay and words, and providing a generous reading of Camus’ work. We can look back and see a distorted moralism in the accusations of Camus’ moralism by Sartre, Jeanson, and so on. Matthew makes a very compelling case for taking Camus’ philosophy seriously, for thinking of Camus as a person of sense and wisdom, as well as a great, lyrical writer. The book is beautifully written and delightful to read. The philosophy of mesure and the virtues of faithfulness, wonder, love, and intelligence, are all in the book and the author.” --Associate Professor Marguerite La Caze, University of Queensland

“Matthew Sharpe conducts an impressive, in-depth study of Camus’ work, presenting him in a tantalizing new light: as a direct heir of the Enlightenment who sought to defend its project in systematic ways, between philosophy and literature.” -- Jean-Philippe Deranty, Macquarie University

"According to Sharpe, Camus’ work—literary fiction, plays, mediations, extended philosophy essays, political journalism—belongs to the Enlightenment’s basic vision of the philosopher as an engaged thinker, whose model was not Plato, but Cicero. Camus’ moderate scepticism means that his work sought to defend the ancient value of Sophrosyne (avoidance of excesses) on new, modern and post-metaphysical foundations, while Sharpe reads his works as communicative acts in public contexts, where the mode of communication was shaped rhetorically to the audience and the situation ...This represented a reactivation of the idea of philosophy as a way of life—as a thoughtful life exemplified by reflective conduct, rather than as an extension of medieval scholasticism into a scientific age in the form philosophical system-building." --Geoffrey Boucher, author of Adorno Reframed (2013).

"While the case Matt Sharpe makes here for reconsidering Camus as a philosophe is original, illuminating, and compelling, far more important is his defense and implicit practice of a Socratic and Ciceronian conception of philosophical commitment that makes that reconsideration possible. As a result, Sharpe's Camus is not only a modern rebel but also truly classic, and at a moment when many are giving a sympathetic ear to Pierre Hadot, Sharpe's Camus has offered us an inspiring exemplum of a far more engaged conception of what it really means to live the life of philosophy." --W.H.F. Altman, author of Plato the Teacher: The Crisis of the Republic (2014) and The Guardians in Actions: Plato the Teacher and the Post-Republic Dialogues from Timaeus to Theaetetus (2016)

Acknowledgements
Abbreviations
Introduction: Camus, Philosophe?
Part I: Cave & Critique
Chapter One: Plague Power: Camus with and against the Critiques of Instrumental Reason
Chapter Two: Theodicy Now? Camus with and against the Secularisation Thesis
Part II: Turning Around, the Rough Ascent
Chapter Three: Between All or Nothing: Camus with and against the ‘Deconstruction of Western Metaphysics’
Chapter Four: From Revolution to Rebellion: Camus with and against the Theorists of Dialogic Ethics
Part III: Going Back Down
Chapter Five: Excluding Nothing: Camus’ NeoHellenic Philosophy of Mesure
Chapter Six: After the Fall, the First Man
Appendix One: L’Homme Révolté in 40 premises
Appendix Two: Camusian Mesure: Philosophe, Aesthetic, and Political
Appendix Three: Philosophy united to Rhetoric: the ‘Master Argument’ in “Letters to a German Friend”
Bibliography
Index
Camus, Philosopher will be of interest to Camus specialists, as the first text to engage his thought systematically with that of Derrida, Foucault, Levinas, Habermas, and others; and to students familiar with post-structuralist thought and critical theory.