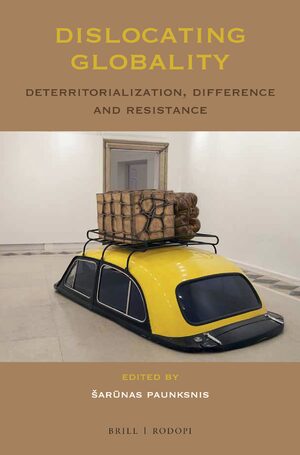 Editor: Šarūnas Paunksnis
Dislocating Globality: Deterritorialization, Difference and Resistance offers a broad panorama of critical approaches to globalization, its effects, the critique of neoliberalism, and discusses various forms of resistance to its monocultural raison d’être. The authors in this volume address these issues from a variety of perspectives – theoretical, as well as geographically diverse case-based analyses ranging from South Asia, the Middle East, Latin America, Europe, and Australia in attempt to show the diverse effects of globalization, and varied forms of negotiating globalization on a local level.

€81.00$107.00
​
Add to Cart
Šarūnas Paunksnis teaches Media Philosophy at Kaunas University of Technology in Kaunas, Lithuania. He is a Fulbright Alumnus, and previously held visiting fellowships at Columbia University, New York; SOAS, London; and Jawaharlal Nehru University, New Delhi. His interests include cultural theory, postcolonial theory, post-structuralism and postmodernism, globalization, dissent, social and cultural alternatives, social and cultural transformations in contemporary urban India, social and political aspects of cinema in India. He is currently writing a book on the critique of alternative Hindi cinema.
Dislocating Globality engages in a vigorous exploration of the complexities of globalization, particularly of some of its neglected aspects. Through a collection of very interesting papers which focus on particularly two essential aspects of the new forms of globality – the logics of political change and of cultural dislocation – it offers a fascinating picture of innovation and creativity on the dark side of the globalization process. Against the pleasant fable of globalization as the universal spread of a benevolent and uniform modernity, this collection offers a picture of a strange, creative, innovative world in the making where things, people and institutions are forced out of their conventional places and functions. The collection offers a fascinating critical view of global modernity in its migratory flows, cultural creativity and displacement, and the surprise of political improvisation.
Sudipta Kaviraj, Columbia University

This collection of essays opens up new research avenues and is going to become a standard reference for scholars of globalization. Traversing diverse global landscapes and working the boundaries between disciplines it sheds light on the dislocating effects produced by the experience of globality on economies, cultures, and societies. And at the same time it dislocates the very notion of globality, demonstrating how multiple practices of resistance haunt the “monocultural” tendencies of globalization from the inside. A fascinating reading and a welcome new start in globalization studies!
Sandro Mezzadra, University of Bologna

From the postcolonial confusions of the Charlie cartoons to the zero-popping arithmetics of a lumpen counter-hegemony, the range and verve of these essays will never allow the mono of 'their' globalization time to recover. A narrowed and homogenised theoretical distance is scattered into constituent variabilities and divergent localities, as each chapter of this book offers a differing and defiant global vernacular burn.
John Hutnyk, RMIT University, Melbourne

This is one of the most challenging and provocative anthologies on globalization to come out in recent times. The editor has managed to bring together a bunch of audacious, youthful and politically committed writers from different parts of the globe whose corners are diverse and wide-ranging. From gentrification in Istanbul and New Delhi to French response to Charlie Hebdo massacre, from disability in Ecuador to social enterprise in indigenous Australia, from analysis of iconic global artists to debating insurgency in the Arab world, from subaltern commodification in third-world industrial slums to the politics of diasporic sexuality – the sheer range of the contributions is mind-boggling. There are also some insightful and cutting-edge theoretical essays. This is activist scholarship at its best. These are the new dissenting voices in the study of globalization.
Bhaskar Mukhopadhyay, the author of The Rumor of Globalization


Dislocating Globility is an attempt to bring 'small voices' from the often sidelined parts of the world to counter and encounter the metropolises. Multidisciplinary, inter-media, and translocational, the project is an alternative articulation to the familiar discourse on globalization.
Kuan-Hsing Chen, National Chiao Tung University

On Autonomy and Migration: The Politics of Statelessness
Jacob P. Chamberlain

Suis-je Charlie? The Colonial Genealogy of The French Response to the Charlie Hebdo Attack
Jeanne Kay

Deterritorialization of the Image: Dissonances in The Imagery of Arab Identity?
Némésis Srour

From the ‘Mad Woman in the Attic’ to the ‘Queer Stranger in the Closet’: Sexuality and Migration at the Crossroads
Mara Matta

Transnationalism as Fragmentation of Globality: Ethnification and Strategies of Reterritorialization of Lithuanian Immigrants in the United States
Vytis Čiubrinskas

The Architects of New Turkey: Globalization of Urban Space in Istanbul and the New Islamic Gentry
Dennis Mehmet

Infrastructures of the Grey: Asli/naqli in a Mohalla Bazaar
Abhijeet Paul

From Self-determination to Self-appreciation: Neoliberalism and Social Enterprise in Indigenous Australia
Maria Halouva

Dreams of Other Space: Heterotopian Emplacements of the Global
Šarūnas Paunksnis