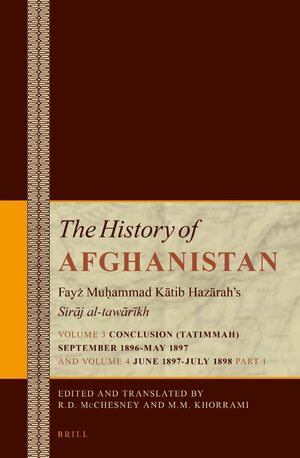 Editors: Robert McChesney and Mohammad Mehdi Khorrami
Volume Four of The History of Afghanistan is published as a five-volume set and completes the previously published six-volume set.

The Sirāj al-tawārīkh is the most important history of Afghanistan ever written. It was commissioned as an official national history by Habib Allah Khan (reigned 1901-1919). Volume Four of this monumental work includes the conclusion to the original volume three and the complete volume four. These volumes were written in final form in the mid-1920s. Unlike the earlier three volumes, they were subject to no official oversight. As a consequence, they are much more candid about life and politics in Afghanistan between 1896 and 1919 than the previous volumes.

The work is of unparalleled significance to anyone studying the social, political, and economic history of Afghanistan as well as its relations with British India, Qajar Iran, Tsarist Central Asia, and the emirate of Bukhara.

The History of Afghanistan is also available as a complete set of 11 volumes, covering all four volumes of this unique resource on Afghanistan.

The complete set of 11 volumes can also be purchased as an online reference work.