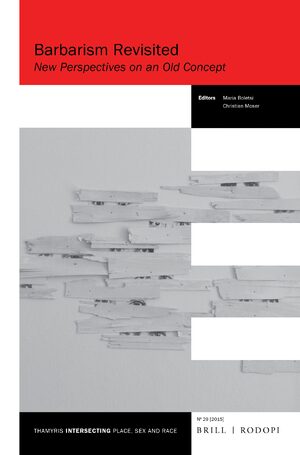 New Perspectives on an Old Concept

Volume Editors: Maria Boletsi and Christian Moser
The figure of the barbarian has captivated the Western imagination from Greek antiquity to the present. Since the 1990s, the rhetoric of civilization versus barbarism has taken center stage in Western political rhetoric and the media. But how can the longevity and popularity of this opposition be accounted for? Why has it become such a deeply ingrained habit of thought that is still being so effectively mobilized in Western discourses?
The twenty essays in this volume revisit well-known and obscure chapters in barbarism's genealogy from new perspectives and through contemporary theoretical idioms. With studies spanning from Greek antiquity to the present, they show how barbarism has functioned as the negative outside separating a civilized interior from a barbarian exterior; as the middle term in-between savagery and civilization in evolutionary models; as a repressed aspect of the civilized psyche; as concomitant with civilization; as a term that confuses fixed notions of space and time; or as an affirmative notion in philosophy and art, signifying radical change and regeneration.
Proposing an original interdisciplinary approach to barbarism, this volume includes both overviews of the concept's travels as well as specific case studies of its workings in art, literature, philosophy, film, ethnography, design, and popular culture in various periods, geopolitical contexts, and intellectual traditions. Through this kaleidoscopic view of the concept, it recasts the history of ideas not only as a task for historians, but also literary scholars, art historians, and cultural analysts.

€87.00$116.00
​
Add to Cart
Maria Boletsi is Assistant Professor at the Film and Comparative Literature department of Leiden University (the Netherlands).


Acknowledgments
Christian Moser and Maria Boletsi. Introduction
I. Setting the Terms: Conceptual and Cultural Histories of Barbarism
François Hartog. Barbarians: From the Ancient to the New World
Markus Winkler. Towards a Cultural History of Barbarism from the Eighteenth Century to the Present
II. Barbarian Configurations in Classic, Medieval, and Early Modern Settings
Daniel Wendt. Laughing (at the) Barbarians: On Barbarism and Humor in Homer and Herodotus
Clara Strijbosch. On the Evil Side of Creation: Barbarians in Middle Dutch Texts
Paul J. Smith. Naked Indians, Trousered Gauls: Montaigne on Barbarism
III. Barbarism and/in Enlightenment Thought, Aesthetics, and Literature
Peter Vogt. The Conceptual History of Barbarism: What Can We Learn from Koselleck and Pocock?
Reinhard M. Möller. Sublime Barbarism? Affinities between the Barbarian and the Sublime in Eighteenth-Century Aesthetics
Madeleine Kasten. Staging the Barbarian: The Case of Voltaire’s Le Fanatisme, ou Mahomet le prophète
IV. Barbarism and the Constitution of Society: Literary Challenges to Evolutionary Models
Christian Moser. Liminal Barbarism: Renegotiations of an Ancient Concept in (Post-)Enlightenment Social Theory and Literature
Steven Howe. “The Seat of the Young, Loving Feelings, thus Delusionally, Barbarically – ”: Barbarism and the Revolutionary State in Heinrich von Kleist’s Penthesilea
Tim Albrecht. Trusting Barbarians? Franz Grillparzer’s The Golden Fleece and the Challenge to the Mythography of Empire
V. Barbarism and/in Modernity
Elke Brüggen and Franz-Josef Holznagel. Des künic Etzelen man – The Huns and their King in Fritz Lang’s Classic Silent Film Die Nibelungen and in the Nibelungenlied
Georgios Sagriotis. Barbarians and Their Cult: On Walter Benjamin’s Concept of New Barbarism
Anna-Maria Valerius. Barbarians betwixt and between: Figurations of the Barbarian in Elfriede Jelinek’s The Children of the Dead
VI. Barbarism in Contemporary Art and Popular Culture
Heidi Denzel de Tirado. The Limes Mexicanicus or the ‘Barbarians at the Gate’: The Depiction of ‘Southern Invaders’ in American Film of the Twenty-First Century
Marjan Groot. Writing Designed Anxieties on Barbarism, Ornament, Taste, and Bio-Design
Gerlov van Engelenhoven and Looi van Kessel. Organizing Cultuur?Barbaar!: Some Problems of Creating Concepts through Art
VII. The Politics of Barbarism
Nikos Patelis. Ultimi Barbarorum: Eloquence and Subjectivity in Twenty-First-Century Social Movements
Maria Boletsi. Waiting for the Barbarians after 9/11: Functions of a Topos in Liminal Times
Terry Eagleton. The Politics of Barbarism
The Contributors
Index