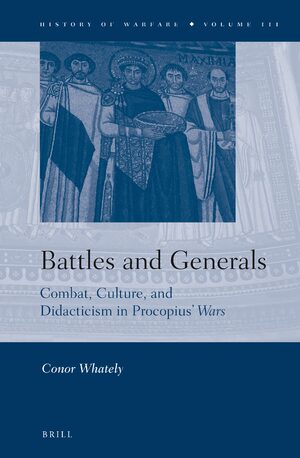 Battles and Generals: Combat, Culture, and Didacticism in Procopius’ Wars

Author: Conor Whately
In Battles and Generals: Combat, Culture, and Didacticism in Procopius’ Wars, Whately reads Procopius’ descriptions of combat through the lens of didacticism, arguing that one of Procopius’ intentions was to construct those accounts not only so that they might be entertaining to his audience, but also so that they might provide real value to his readership, which was comprised, in part, of the empire’s military command. In the course of this analysis we discover that the varied battles and sieges that Procopius describes are not generic; rather, they have been crafted to reflect the nature of combat – as understood by Procopius – on the three fronts of Justinian’s wars, the frontier with Persia, Vandal north Africa, and Gothic Italy.
E-Book (PDF)

€113.00$156.00
​
Add to Cart
Conor Whately, Ph.D. (2009, Warwick), is an assistant professor of Classics at the University of Winnipeg. He has published widely on Roman military history and late antique historiography, including a monograph (forthcoming) on the Roman army in Moesia.
''The book is clearly written and structured and based on detailed knowledge of classical Greek military historiography and modern literature on this literary genre. Its focus on battle description is to be commended [...] Whately does not believe that Procopius had one overriding narrative aim but that he set out to convey numerous messages.Whately is to be praised for demonstrating that the literary nature of such texts does not detract from their historicity. [...] the book should be essential reading for anyone interested in Procopius, late antiquity warfare, and the Justinianic era." - Alexander Sarantis, in: Speculum 94/4 (October 2019)
Contents
Prologue: The Battle of Callinicum ix
Acknowledgements xii
Note on Translation and Transliteration xiv
Introduction 1
1 Premise 1
2 A Cultural Approach to Procopian Combat 6
3 History as Literature 8
4 Rhetoric and Truth in Procopius’ Wars 13
5 Methodology 20
6 Three Facets of Ancient Combat 22
a Describing Combat in Antiquity 22
b Explaining Combat in Antiquity 25
c Great Man History and Generalship 31
7 Chapter Organization 34
8 The Wider Applicability of Procopian Combat 36
1 The Life of Procopius 38
1 Procopius’ Life, Family, and Social Background 38
2 Religious Views 43
3 The Breadth of Procopius’ Reading 45
4 Procopius the Rhetor 56
5 Procopius the Philosopher and Engineer 58
6 Procopius’ Literary Career 61
7 Procopius’ Service in the Military and His Sources 64
8 Concluding Thoughts 66
2 How to Defeat the Persians in Combat 68
1 The Persian Wars 69
2 Describing Combat 70
a Programmatic Combat 70
b Foreshadowing and the Exhortations of Generals 75
c The Excitement of Battle 84
3 Explaining Combat 89
a Tactics, Morale, and the Stratagem 89
b Procopius, God and Morality 101
4 Generalship: Belisarius vs. the Shahanshah 105
a Enter Belisarius 107
b Enter Khusro 109
c Belisarius vs. Khusro 111
5 Concluding Thoughts 113
3 How to Defeat the Vandals in Combat 115
1 The Vandal Wars 116
2 Describing Combat 117
a Narrative Order 117
b The Role of the Narrator 122
c Numbers and Names 125
d Textual Unity and Internal Referencing 131
3 Explaining Combat 134
a Exhortations and Morale 134
b Guerrilla Warfare and the Absence of Fighting 139
c The Desire for Plunder 141
d Procopius and Ancient Military Maxims 145
4 Generalship: Belisarius, the Lucky and Prepared General 152
5 Concluding Thoughts 157
4 How to Defeat the Goths in Combat 158
1 The Gothic Wars 159
2 Describing Combat 160
a Graphic Battle Scenes 161
b Single Combat 169
c Myriads, Romans and Barbarians 171
3 Explaining Combat 177
a Arete 177
b Horse-Archery 181
4 Generalship: Belisarius and Heroic Leadership 188
a Leading From the Front: Heroic Leadership 188
b The Achilles Ethos vs. the Odysseus Ethos 190
5 Concluding Thoughts 196
5 Book Eight 197
1 Battles 199
a River Hippis 199
b Senogallia 201
c Busta Gallorum 203
2 Sieges 210
a Archaeopolis 210
b Petra 214
3 Concluding Thoughts 218
6 Procopius’ Worldview and the Wider Intellectual Context 219
1 Procopius’ Audience 219
2 Didacticism, Combat and Culture 224
3 The “Face of Procopian Combat” 231
4 Conclusion 232
Map: The World of Justinian 236
Appendix 1: Glossary of Procopian Battles and Sieges 237
Appendix 2: Win/Loss Records of the Persian and Roman Armies in the
Persian Wars 244
Select Bibliography 247
Index 272
All interested in historiography and warfare in the age of Justinian, as well as anyone with an interest in ancient and medieval historiography and warfare more generally.

Battlefield Emotions in Late Antiquity: A Study of Fear and Motivation in Roman Military Treatises 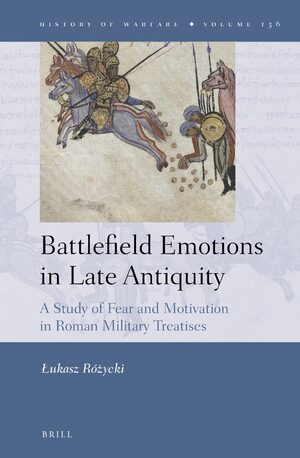 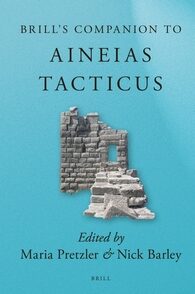 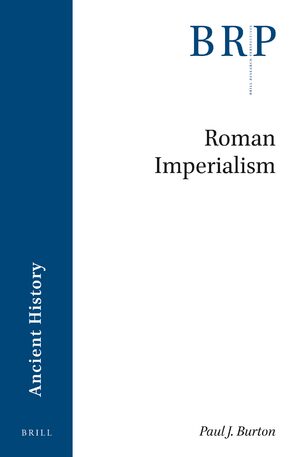