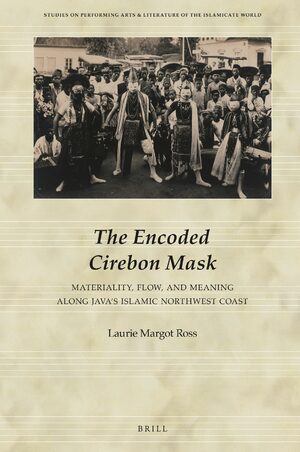 Author: Laurie Margot Ross
In The Encoded Cirebon Mask: Materiality, Flow, and Meaning along Java’s Islamic
Northwest Coast, Laurie Margot Ross situates masks and masked dancing in the Cirebon region of Java (Indonesia) as an original expression of Islam. This is a different view from that of many scholars, who argue that canonical prohibitions on fashioning idols and imagery prove that masks are mere relics of indigenous beliefs that Muslim travelers could not eradicate. Making use of archives, oral histories, and the performing objects themselves, Ross traces the mask’s trajectory from a popular entertainment in Cirebon—once a portal of global exchange—to a stimulus for establishing a deeper connection to God in late colonial Java, and eventual links to nationalism in post-independence Indonesia.

€103.00$147.00
​
Add to Cart
Laurie Margot Ross, Ph.D. (2009), University of California, Berkeley, is a researcher, curator, and educator of Islamic visual culture and performance, based in New York. She was an SSRC Transregional fellow at Cornell University and also taught at UC Berkeley.
"This is a rare case of a scholar taking seriously the Islamic religious sentiments that underlie a local Southeast Asian artistic tradition." - Shahzad Bashir, Lysbeth Warren Anderson Professor in Islamic Studies, Stanford

Chapter 1:
The Pasisir in the Age of Steam, Sail, and the Railway

Chapter 5:
Engaging the Body and the Senses

Appendix I: The Topeng Cosmology

Works Consulted
Practitioners, graduate students, academic libraries, and all interested in Southeast Asian performing arts and the interplay between visual culture, religion, emotions, and human agency, will find this book of interest.