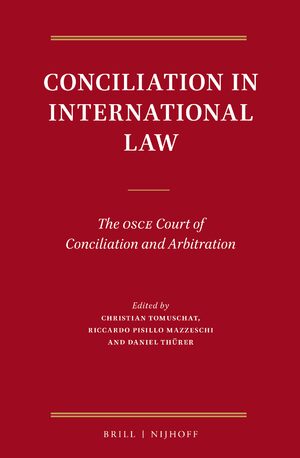 The OSCE Court of Conciliation and Arbitration

Editors: Christian Tomuschat, Riccardo Pisillo Mazzeschi and Daniel Thürer
This volume collects the materials underlying the International Colloquium “Conciliation in the Globalized World of Today“, held on 11 and 12 June 2015 in Vienna under the auspices of the Court of Conciliation and Arbitration within the OSCE. The aim of the Colloquium was to examine the merits and possible shortcomings of this method of conflict resolution, and it concluded that the pros heavily outweigh the cons.
This volume therefore draws the attention of everyone dealing with conflict management to those advantages. It does not end by providing a summary of conclusions to be drawn from the examination of the rules governing the OSCE Court and the practice of the other institutions considered. The reader will have to find out her/himself what experiences have been made in other fields where conciliation has been institutionalized as a dispute-settlement procedure. In this regard, the present book constitutes a treasury of lessons that cannot easily be brought down to a common denominator.
E-Book (PDF)

€135.00$175.00
​
Add to Cart
Christian Tomuschat is Professor em. of the Faculty of Law of Humboldt University, Berlin. Education at the universities of Heidelberg and Montpellier. From 1972 to 1995 he was Professor for Constitutional and International Law at the University of Bonn. He lectured at the Hague Academy of International Law in 1993 and 1999 (General Course). He was a member of the Human Rights Committee under the International Covenant on Civil and Political Rights (1977-1986) and of the International Law Commission (1985–1999, President in 1992). From 1997 to 1999, he coordinated the Commission for Historical Clarification in Guatemala. He served as judge on the Administrative Tribunal of the Inter-American Development Bank (1995-1997) and on the Administrative Tribunal of the African Development Bank (1999-2008). He became a member of the Institut de droit international in 1997. Since September 2013, he discharges the functions of the President of the Court of Conciliation and Arbitration within the OSCE. He is the author of numerous books and articles. Among his latest publication is Human Rights. Between Idealism and Realism (3rd ed. Oxford 2014). He is also one of the co-editors and authors of the Commentary on the Statute of the ICJ (2nd ed. Oxford 2012).