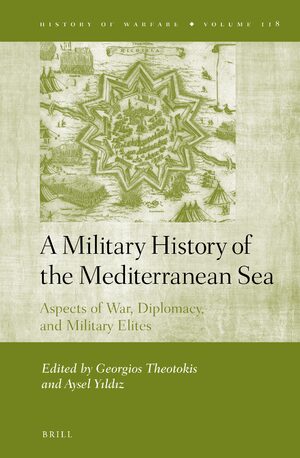 A Military History of the Mediterranean Sea

Editors: Georgios Theotokis and Aysel Yıldız
The Mediterranean has always attracted the imagination of modern historians as the epicentre of great political entities, such as the Egyptians, Greeks, Romans, Arabs, Ottomans, Venetians, and Spanish. However, it seems that the sea itself was always on the margins of historical inquiry – at least, until the publication of the famous two-volume work by F. Braudel in 1949. This collection of essays aims to offer a vertical history of war in the Mediterranean Sea, from the early Middle Ages to the early modernity, putting the emphasis on the changing face of several different aspects and contexts of war over time.
Contributors are Stephen Bennett, Stathis Birtachas, Cornel Bontea, Wayne H. Bowen, Lilia Campana, Raffaele D’Amato, Elina Gugliuzzo, Nikolaos Kanellopoulos, Savvas Kyriakides, Tilemachos Lounghis, Alan V. Murray, Chrysovalantis Papadamou, Jacopo Pessina, Philip Rance,
Georgios Theotokis, Iason Tzouriadis, Ian Wilson, and Aysel Yildiz.

€110.00$132.00
​
Add to Cart
Georgios Theotokis, Ph.D in History (2010, University of Glasgow), is a historian specialising in the military history of the eastern Mediterranean. His first monograph was on the Norman Campaigns in the Balkans 1081–1108 (2014), while his second book on the Byzantine Military Tactics in Syria in the 10th century will be out in the autumn of 2018.
Aysel Yıldız, Ph.D. in History (2008, Sabancı University). Specialization in late Ottoman history and palaeography, with a special focus on political and military history and social movements. She is the editor of the book titled Asiler ve Gaziler: Kabakçı Mustafa Risalesi (2007) and the author of Crisis and Rebellion in the Ottoman Empire: The Downfall of a Sultan in the Age of Revolution (2017).


"...There is much that is strikingly original here, not just the research itself but also the volume’s synergy, and for that and many other reasons the editors deserve accolades."
Mark Charles Fissel, Augusta University in De Re Militari, posted September 22, 2018 (http://deremilitari.org/2018/09/georgios-theotokis-and-aysel-yildiz-eds-a-military-history-of-the-mediterranean-sea-aspects-of-war-diplomacy-and-military-elites-fissel/)
Contents


1 The Byzantine War Navy and the West, Fifth to Twelfth Centuries
T.C. Lounghis
2 The Defence of the Venetian Dominio Da Mar in the Sixteenth Century: Ship Design, Naval Architecture, and the Naval Career of Vettor Fausto’s Quinquereme
Lilia Campana
3 Sea Power and the Ottomans in the Early Modern Mediterranean World
Elina Gugliuzzo
4 Conflict and Collaboration: The Spanish and Ottoman Navies in the Mediterranean, 1453-1923
Wayne H. Bowen


8 The Middle Ground: The Passage of Crusade Armies to The Holy Land By Land and Sea (1096-1204)
Alan V. Murray
9 The Theory of the Passagium Particulare: A Commercial Blockade of the Mediterranean in the Early Fourteenth Century?
Cornel Bontea
10 Faith and Authority: Guy of Lusignan at the Battle of Acre (4th October 1189)
Stephen Bennett
11 By the Sword or by an Oath: Siege Warfare in the Latin East 1097-1131
Ian Wilson

15 Stradioti, Cappelletti, Compagnie or Milizie Greche: ‘Greek’ Mounted and Foot Mercenary Companies in the Venetian State (Fifteenth to Eighteenth Centuries)
Stathis Birtachas
16 A Secret War: Espionage in Venetian Corfu during the Construction of the San Marco Fortress
Chrysobalantis Papadamou
17 “Rather the Wealth to Support Their Status than Their Quality as Soldiers”. The Social Position of the Officers in Lucca’s Ordinanze Della Montagna, 1550-1600
Jacopo Pessina
18 Commanders of the Janissary Army: The Janissary Ağas, Their Career and Promotion Patterns
Aysel Yildiz

Anyone interested in the socio-political and military history of the Mediterranean Sea and the surrounding regions, from Late Antiquity to early modernity.