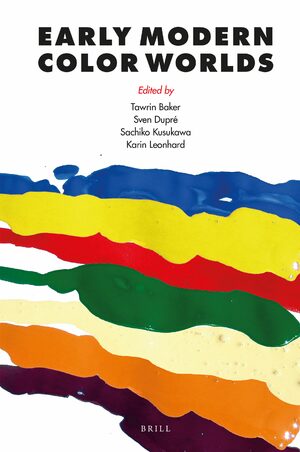 Volume Editors: Tawrin Baker, Sven Dupré, Sachiko Kusukawa, and Karin Leonhard
Color has recently become the focus of scholarly discussion in many fields, but the categories of art, craft, science and technology, unreflectively defined according to modern disciplines, have not been helpful in understanding color in the early modern period. ‘Color worlds’, consisting of practices, concepts and objects, form the central category of analysis in this volume. The essays examine a rich variety of ‘color worlds’, and their constituent engagements with materials, productions and the ordering and conceptualization of color. Many color worlds appear to have intersected and cross-fertilized at the beginning of the seventeenth century; the essays focus especially on the creation of color languages and boundary objects to communicate across color worlds, or indeed when and why this failed to happen.

Barbara H. Berrie
Barbara H. Berrie is head of scientific research at the National Gallery of Art, Washington D.C. Her research interests include preservation methods for works of art and the history of pigments. She is the editor of volume four of Artists’ Pigments: a handbook of their history and characteristics.

Sven Dupré
Sven Dupré is Professor of History of Art, Science and Technology at Utrecht University and the University of Amsterdam. He is the Director of the project ‘Technique in the Arts: Concepts, Practices, Expertise, 1500-1950’, supported by a European Research Council (ERC) Consolidator Grant. Previously he was Professor of History of Knowledge at the Freie Universität and Director of the Research Group ‘Art and Knowledge in Premodern Europe’ at the Max Planck Institute for the History of Science in Berlin. In Spring 2015 he was Robert H. Smith Scholar in Residence for Renaissance Sculpture in Context at the Victoria and Albert Museum in London. His recent publications include Embattled Territory: The Circulation of Knowledge in the Spanish Netherlands (Academia Press, 2015), Laboratories of Art: Alchemy and Art Technology from Antiquity to the 18th Century (Springer, 2014), Art and Alchemy: The Mystery of Transformation (Hirmer, 2014) and Translating Knowledge in the Early Modern Low Countries (LIT, 2012).

Fokko Jan Dijksterhuis
Fokko Jan Dijksterhuis is professor in knowledge history (University of Twente; Free University). After a dissertation on Christiaan Huygens and seventeenth-century optics he investigated the cultural history of mathematization. He is interested in early modern knowledge practices, and everything related to light, color and vision.

Sachiko Kusukawa
Sachiko Kusukawa is Professor of History of Science and Fellow of Trinity College, Cambridge. She is author of Picturing the Book of Nature: Image, Text, and Argument in Sixteenth-Century Human Anatomy and Medical Botany (Chicago: University of Chicago Press, 2012) and is now working on the graphic practices of the early Royal Society.

Karin Leonhard
Karin Leonhard is Professor for Art History at Konstanz University, Germany. A main focus of her research lies on the history and theory of space and perspective, light and color; and, more generally, the interrelation between art theory and natural philosophy.

Doris Oltrogge
Doris Oltrogge is an art historian and researcher at the CICS (Cologne Institute of Conservation Sciences). Her fields of research include art technological sources, painting materials, and the technique of book illumination.

Valentina Pugliano
Following one postdoctoral year at the Max Planck Institute for the History of Science in Berlin, Valentina Pugliano relocated to the Department of History and Philosophy of Science at the University of Cambridge in 2013 as a Wellcome Trust Research Fellow and a JRF at Christ’s College. She is currently completing two monographs: the first based on her doctoral research at Oxford on artisanal participation in early modern natural history; and a second, based on a Wellcome-funded research project, on Venetian medicine and science in the eastern Mediterranean and the Mamluk and Ottoman Levant, ca. 1400–1730.

Simon Werrett
Simon Werrett is a Senior Lecturer in the Department of Science and Technology Studies at University College London. He has been a fellow of the Rachel Carson Center for Environment and Society in Munich and the Max Planck Institute for the History of Science in Berlin. He is the author of Fireworks: Pyrotechnic Arts and Sciences in European History (Chicago, 2010) and is currently writing a book on the sustainability of science.

"This volume focuses on a relatively unstudied topic and treats it from fresh perspectives. The book as a whole underscores the complexity of color and the extensive relationships that color can bring to light among the worlds of learning, naturalexperimental philosophies, and artisanal practices." - Pamela O. Long, Renaissance Quarterly, Vol. LXX, No. 4, pp. 1520-1522
Introduction: Early Modern Color Worlds 1
Tawrin Baker, Sven Dupré, Sachiko Kusukawa, Karin Leonhard

Understandings of Colors: Varieties of Theories in the Color Worlds of the Early Seventeenth Century 227
Fokko Jan Dijksterhuis

The Saline Chymistry of Color in Seventeenth-Century English Natural History 274
Anna Marie Roos
All interested in the history of science and medicine, specifically the history of vision, medical theory and practice, alchemy, chymistry and natural history.