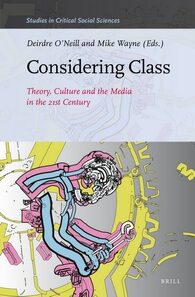 Considering Class: Theory, Culture and the Media in the 21st Century

Editors: Deirdre O'Neill and Mike Wayne
Considering Class: Theory, Culture and Media in the 21st Century offers the reader international and interdisciplinary perspectives on the importance of class analysis in the 21st century. Political economists, sociologists, educationalists, ethnographers, cultural and media analysts combine to provide a multi-dimensional account of current class dynamics. The crisis consists precisely in the gap between the objective reality and efficacy of class forces shaping international politics and the relative paucity of class-consciousness at a popular level and appreciation of class as an explanatory optic at a theoretical level. This important book shows why the process of reconstructing class consciousness must also take place on the ground of cultural and subjective formation where everyday values, habits and media practices are in play.

€130.00$150.00
​
Add to Cart
Deirdre O’Neill is a working class lecturer and filmmaker. Her forthcoming book Film as a Radical Pedagogic Tool explores the way in which film can be used as a means of working class people representing their own lives.

Mike Wayne has written widely on the politics and ideology of film, television and the media as well as Marxist cultural theory. His most recently published book is Red Kant: Aesthetics, Marxism and the Third Critique (Bloomsbury, 2014).

6 The ‘Secret’ of the Restoration: Increased Class Exploitation
Maurizio Donato and Roberto Taddeo

11 The British Working Class Post-blair Consensus: We Do Not Exist
Lisa Mckenzie

Part 3: Class and the Media

14 ‘Everything Changes. Everything Stays the Same’: Documenting Continuity and Change in Working Class Lives
Anita Biressi

15 Ghettos and Gated Communities in the Social Landscape of Television: Representations of Class in 1982 and 2015
Fredrik Stiernstedt and Peter Jakobsson

16 Class, Culture and Exploitation: The Case of Reality
Milly Williamson

17 Class Warfare, the Neoliberal Man and the Political Economy of Methamphetamine in
Michael Seltzer

18 ‘The Thing Is I’m Actually from Bromley’: Queer/Class Intersectionality in (2014)
Craig Haslop