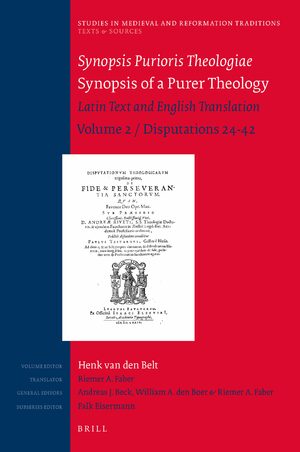 Authors: Henk van den Belt, Riemer Faber, Andreas Beck and William den Boer
This bilingual edition of the Synopsis Purioris Theologiae (1625) provides English readers access to an influential textbook of Reformed Orthodoxy. Composed by four professors at the University of Leiden (Johannes Polyander, Andreas Rivetus, Antonius Walaeus, and Anthonius Thysius), it offers a presentation of Reformed theology as it was conceived in the first decades of the seventeenth century. From a decidedly Reformed perspective, the Christian doctrine is defined in contrast with alternative or diverging views, such as those of Roman Catholics, Arminians, and Socinians. The Synopsis responds to challenges coming from the immediate theological, social, and philosophical contexts. The disputations of this second volume cover topics such as Predestination, Christology, Faith and Repentance, Justification and Sanctification, and Ecclesiology.

€126.00$154.00
​
Add to Cart
H. (Henk) van den Belt
(1971), Ph.D. (2006) Leiden University, is Professor of Reformed Theology: Sources, Development, and Context at the University of Groningen. He is the author of The Authority of Scripture in Reformed Theology: Truth and Trust (Brill, 2008) and of several articles on Reformed Orthodoxy and on neocalvinism; he also edited Restoration through Redemption: John Calvin Revisited (Brill, 2013).

R.A. (Riemer) Faber
(1961), Ph.D. (1992) University of Toronto. He is Associate Professor of Classical Studies at the University of Waterloo, and Director of the Waterloo Institute for Hellenistic Studies. His research interests include Greek and Latin philology and literary criticism, and neo-Latin, and he has published widely in these fields. Most recently he co-edited Belonging and Isolation in the Hellenistic World (University of Toronto Press, 2013).

A.J. (Andreas) Beck
(1965), Ph.D. (2007) Utrecht University, is Professor of Historical Theology and Academic Dean at the Evangelische Theologische Faculteit, Leuven, and the director of the Institute of Post-Reformation Studies there. He is the author of Gisbertus Voetius (1589–1676). Sein Theologieverständnis und seine Gotteslehre (Vandenhoeck & Ruprecht, 2007), and author or co-editor of numerous articles and volumes on medieval and early modern history, theology and philosophy. Since June 2014, he serves as chair of the research group Classic Reformed Theology.

“As an early survey of academic theology in the Reformed Church, the Synopsis is pertinent both to the historian and dogmatician, and its availability in English should lead to the continued historical re-evaluation and theological ressourcement of Reformed theology in that oft-neglected period after the Synod of Dort.”
Phillip Hussey, Saint Louis University. In: The Journal of Ecclesiastical History, Vol. 70, No. 1 (January 2019), pp. 195-196.

Scholars and students in historical and systematic theology; all those interested in intellectual history of the Early Modern era; classical scholars with an interest in patristic and later Christian literature.