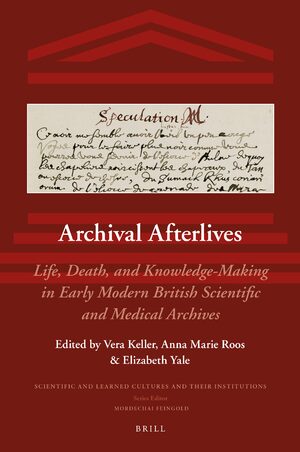 Series:  Scientific and Learned Cultures and Their Institutions, Volume: 23
Editors: Vera Keller, Anna Marie Roos, and Elizabeth Yale
Archival Afterlives explores the posthumous fortunes of scientific and medical archives in early modern Britain. If early modern natural philosophers claimed all knowledge as their province, theirs was a paper empire. But how and why did naturalists engage with archives, and in particular, with the papers of their dead predecessors? This volume makes a firm case for expanding what counts as scientific labour, integrating scribes, archivist, library keepers, editors, and friends and family of deceased naturalists into the history of science. It shows how early modern natural philosophers pursued new natural knowledge in dialogue with their recent material past. Finally, it demonstrates the sustaining importance of archival institutions in the growth and development of the “New Sciences.”

Vera Keller, Ph.D. (2008), Princeton, is Associate Professor of History at the Robert D. Clark Honors College, University of Oregon. Keller is the author of Knowledge and the Public Interest, 1575-1725 (Cambridge, 2015), in addition to many articles.

Elizabeth Yale, Ph.D. (2008), Harvard, is a Lecturer of History at the University of Iowa. Yale has published several journal articles, and she is the author of Sociable Knowledge: Natural History and the Nation in Early Modern Britain (University of Pennsylvania Press, 2016).

Arnold Hunt, D.Phil. (1998), Cambridge, is a Lecturer in the Faculty of History and Fellow of Girton College, Cambridge. Previously, he was a Curator of Manuscripts at the British Library. His book The Art of Hearing: English Preachers and their Audiences 1590-1640 was published in 2010.

Michael Hunter, D.Phil. (1975), Oxford, is Emeritus Professor of History at Birkbeck College, University of London. He is the principal editor of the Works, Correspondence and work diaries of Robert Boyle and author of Boyle: Between God and Science (2009), as well as many articles and books of intellectual history.

Carol Pal, Ph.D. (2007), Stanford, teaches history at Bennington College. She is the author of Republic of Women: Rethinking the Republic of Letters in the Seventeenth Century (Cambridge, 2012), which was awarded the 2013 Joan Kelly Memorial Prize.

Richard Serjeantson, Ph.D. (1998), Cambridge, is a Fellow and Director of Studies in History at Trinity College, Cambridge. He serves as a deputy director of the Oxford Francis Bacon, for which he is editing Volume III: Earlier Jacobean Writings, 1603–1613 with Angus Vine.

Victoria Sloyan is an archivist at the Wellcome Library, London. She qualified in 2011 and has previously worked at the Bodleian Library and London South Bank University. Her research interests lie in born-digital records and the acquisition of scientific archives.