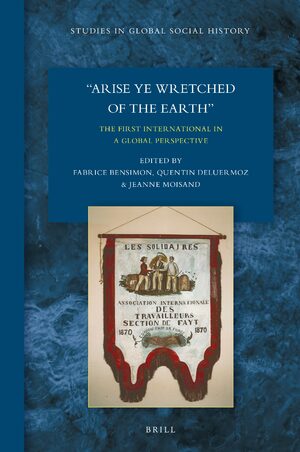 "Arise Ye Wretched of the Earth": The First International in a Global Perspective

Series:  Studies in Global Social History, Volume: 29
Editors: Fabrice Bensimon, Deluermoz Quentin, and Jeanne Moisand
“Arise Ye Wretched of the Earth” provides a fresh account of the International Working Men’s Association. Founded in London in 1864, the First International gathered trade unions, associations, co-operatives, and individual workers across Europe and the Americas.
The IWMA struggled for the emancipation of labour. It organised solidarity with strikers. It took sides in major events, such as the 1871 Paris Commune. It soon appeared as a threat to European powers, which vilified and prosecuted it. Although it split up in 1872, the IWMA played a ground-breaking part in the history of working-class internationalism.
In our age of globalised capitalism, large labour migration, and rising nationalisms, much can be learnt from the history of the first international labour organisation.

€140.00$168.00
Hardback
Add to Cart
About MyBook
Fabrice Bensimon specialises in British History at Sorbonne Université and is currently a Marie Sklodowska-Curie Research fellow at University College London.
Quentin Deluermoz is Associate Professor in History at the University of Paris 13, Research Fellow at the Centre de recherches historiques (EHESS) and member of IUF.
Jeanne Moisand is Associate Professor in History at the Panthéon-Sorbonne University – Paris 1 and member of the Centre d’histoire du XIXe siècle (Paris 1 – Paris 4).

"The essays are well written and well documented. Of particular interest, especially to students of the larger Left, is Jürgen Herres’s contribution, “Karl Marx and the IWMA Revisited,” which provides a much-needed, post–Cold War perspective on the leading—but not authoritarian—figure of the First International during the first wave of globalization. Contributions on Latin American and US sections of the IWMA relieve the time-worn Eurocentrism of many past analyses, and one essay explores the roles and opportunities for women in the overwhelmingly male-dominated groups. In sum, the coverage is well rounded." - J. A. Young, in: CHOICE 56:2 (2018)
"The contributions to the collection, both individually and collectively, greatly enrich and bring up-to-date our knowledge and understanding of the IWMA. They also flag important areas of future research, especially those around gender, race and transnationalism. In sum, this book provides a treasure-trove of information and insights for all those interested in labour internationalism, its mid-nineteenth century development, its many-sided character and its strengths and weaknesses." - Neville Kirk, in: Labour History, No. 115 (November 2018), pp. 179-181
"...this book is quite a successful work, certainly as a history of the IWMA itself, but also as a broader contribution to a trans-national and even global view of the working-class organisation and political radicalism during the third quarter of the nineteenth century. Indeed, it is as an analysis of the interaction between the national and the trans-national and global, in political radicalism and working-class organisation, and as an account of both the breaks and the continuities in these interactions that the book makes its greatest scholarly contribution." - Jonathan Sperber, in: Cultural and Social History (2019) [DOI: 10.1080/14780038.2019.1572693]
"Der gut lesbare und in jedem Fall nicht nur für das spezialisierte Fachpublikum instruktive Band versammelt (neben einer guten Einleitung der Herausgeber) 23 Beiträge aus der Feder zum großen Teil prominenter Kenner der Geschichte der Arbeiterbewegungen beziehungsweise der Pariser Kommune [...] Jüngere Spezialisten und Spezialistinnen zeichnen sogar für die Mehrzahl der Beiträge verantwortlich, und so bewegt er sich durchaus am cutting edge der Forschung''. Thomas Welskopp, in Francia Recensio 4, (2019).

5 Transnational Solidarity in the Making

7 The IWMA and the Commune

10 The First International in Switzerland

11 For Independent Poland and the Emancipation of the Working Class

13 The Italians and the IWMA
Carl Levy

15 Revolutions, Republics and IWMA in the Spanish Empire (around 1873)
Jeanne Moisand

20 The Construction of Proudhonism within the IWMA
Samuel Hayat

21 Professor Beesly, Positivism and the International

22 Bringing Together Feminism and Socialism in the First International

24 Carlo Cafiero and the International in Italy

Appendix 1: The IWMA – A Brief Chronology
Appendix 2: Membership
Indexes
All interested in the worker’s history. Academic libraries would also be interested. Post-graduate and undergraduate students.