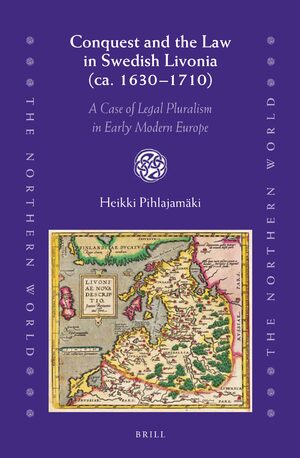 A Case of Legal Pluralism in Early Modern Europe

Author: Heikki Pihlajamäki
Now available in Open Access thanks to the support of the University of Helsinki. In Conquest and the Law in Swedish Livonia (ca. 1630-1710), Heikki Pihlajamäki offers an exciting account of the law and judiciary in seventeenth-century Livonia. Immediately after Sweden conquered the province in the 1620s, a reorganization of the Livonian judiciary began. Its legal order became largely modelled after Swedish law, which differed in important ways from its Livonian counterpart. While Livonian legal tradition was firmly anchored in the European ius commune, the conquerors’ law was, by nature, not founded in legal learning. The volume convincingly demonstrates how the differences in legal cultures decisively affected the way Livonian judicial and procedural systems were shaped. Based on archival sources, the study presents an important contribution to the comparative legal history of the early modern period.
E-Book

€122.00$146.00
Hardback
Add to Cart
About MyBook
Heikki Pihlajamäki is Professor of Comparative Legal History at the University of Helsinki. He has published extensively on the legal history of Scandinavia, Europe and America. His research covers a broad time-span from the early modern period to the twentieth century.
''The routine of legal systems frequently escapes our notice, and imperial ventures only compound this challenge. They either ignored indigenous law or subsumed it in the cogs of colonial administration. Heikki Pihlajamäki’s Conquest and the Law in Swedish Livonia, however, does not shrink before these obstacles. Working withafarfromcompletesetofrecordsacrossanumber of linguistic boundaries—German, Latin, and Swedish, to name the main ones—Pihlajamäki explores how Livonia’s colonial courts worked from the medieval period, when the Teutonic Order held sway, through the end of Swedish rule in 1710. He concludes that Sweden’s institutions influenced Livonia, but Sweden’s law did not, giving us a fresh look at this historically interlegal space. Pihlajamäki’s examination of imperial transformation through legal practices also rescues Livonia from the role of imperial plaything. [...] Conquest and the Law in Swedish Livonia is an important study. The larger interpretive enterprise of which it is a part calls on us all to do better by the history of the Baltic world.
W.Douglas Catterall, in H-Net Reviews (2019).

Contents
Acknowledgements vii
1 Introduction 1
1.1 The Research Questions 1
1.2 Archival Material 10
1.3 Previous Research 13
1.4 The Structure of the Book 18
2 The Outset: The Livonian and Swedish Legal Orders at the Time of the
Swedish Conquest 21
2.1 Livonian Administration, Judiciary, and the Legal Procedure before
the Swedish Conquest 21
2.2 Livonian Law and the Legal Sources: The European Context 41
2.3 Swedish Law before the Conquest of Livonia 64
2.4 Summary 82
3 The Reorganisation of the Livonian Judiciary under the Swedish
Rule 85
3.1 The Alternatives: Colonial Systems and Their Judicial
Organisations 85
3.2 Sweden’s Other Overseas Possessions: Organizing the Judiciary in
Estonia and the Reich 94
3.3 Reforming the Livonian Judicial Structure 100
3.4 The Personnel in Charge: Judges, Lawyers, and Administrators 135
3.5 Summary 149
4 The Procedure in the Livonian Courts of the Swedish Era 151
4.1 The Classification of Cases into Civil and Criminal 151
4.2 The Civil Procedure in the Lower Courts 153
4.3 The Criminal Procedure in the Lower Courts 172
4.4 The Cases and the Procedure at the High Court of Dorpat 216
4.5 The Revision Procedure 228
4.6 Summary: Legal Procedure in Seventeenth-Century Livonia 235
5 Transplanting Swedish Law? The Legal Sources at the Livonian
Courts 238
5.1 The Theory of Legal Spheres 238
5.2 The Ius Commune in the Livonian Court Records 239
5.3 The Influence of Swedish Law in Livonia 244
5.4 The Livonian Legal Sources 246
5.5 Divine Law and Natural Law 248
5.6 The Theory and the Practice of Legal Sources: Europe and
Livonia 249
6 Conclusions 256
6.1 The Starting Point: Livonian and Swedish Law before the
Conquest 256
6.2 The Organization of the Judiciary in Swedish Livonia 258
6.3 The Judicial Procedure 259
6.4 Legal Sources in the Courts of Swedish Livonia 262
Sources and Bibliography 265
Archival Sources 265
Printed Sources 265
Literature 266
Index 291
All interested in the legal history of the early modern period, comparative legal history and the history of the Baltic region.