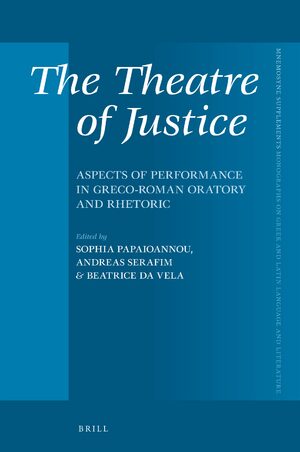 The Theatre of Justice

Aspects of Performance in Greco-Roman Oratory and Rhetoric

HerausgeberInnen: Sophia Papaioannou, Andreas Serafim und Beatrice da Vela
The Theatre of Justice contains 17 chapters that offer a holistic view of performance in Greek and Roman oratorical and political contexts. This holistic view consists of the examination of two areas of techniques. The first one relates to the delivery of speeches and texts: gesticulation, facial expressions and vocal communication. The second area includes a wide diversity of techniques that aim at forging a rapport between the speaker and the audience, such as emotions, language and style, vivid imagery and the depiction of characters.
In this way the volume develops a better understanding of the objectives of public speaking, the mechanisms of persuasion, and the extent to which performance determined the outcome of judicial and political contests.
E-Book

€ 126,00$ 146,00
​
In den Warenkorb
Sophia Papaioannou, Ph.D. (1998), University of Texas-Austin, is Associate Professor of Latin Literature at the National and Kapodistrian University of Athens. She specializes in Augustan Literature and Roman Comedy. Her most recent monograph is Terence and Interpretation (Cambridge Scholars Publishing, 2014).

Andreas Serafim, Ph.D. (2013), University College London, is a Government of Ireland Postdoctoral Fellow in the Department of Classics at Trinity College Dublin and Adjunct Lecturer at the Open University of Cyprus. He is a specialist in Greek rhetoric and performance criticism. His monograph, Attic Oratory and Performance, will be published by Routledge (forthcoming 2017). A sample of his research is presented in his recently published Classical Quarterly article “Making the Audience: Ekphrasis and Rhetorical Strategy in Demosthenes 18 and 19” (CQ, 2015, 96-108).

Beatrice da Vela, MPhil (2010), University of Cambridge, is a teacher and independent researcher. Her interests include literary and rhetoric education in Late Antiquity, with a strong focus on the relation between drama and classroom practice, the reception of Roman literature in culture in modern history and Classical reception in contemporary Italian literature.

2. Audience reaction, performance and the exploitation of delivery in the courts and assembly
Ian Worthington

4. Would I lie to you? Narrative and performance in Isaios 6
Brenda Griffith-Williams

5. The orator and the ghosts: performing the past in fourth-century Athens
Guy Westwood

9. Pitiable Dramas on the Podium of the Athenian Law Courts
Kostas Apostolakis

10. From the Stage to the Court: Rhetorical and Dramatic Performance in Donatus’ Commentary on Terence
Beatrice da Vela

Part 4: Emotions in the Law-Court

12. The Mind’s Theatre: Envy, Hybris and Enargeia in Demosthenes’ Against Meidias
Dimos Spatharas

13. How to “Act” in an Athenian Court: Emotions and Forensic Performance
Edward M. Harris

14. Roman Judges and Their Participation in the “Theatre of Justice”
Jon Hall

Part 5: Language and Style in Performance

16. Narrative and Performance in the Speeches of Apollodoros
Konstantinos Kapparis

17. Public performance and the language of Antiphon’s speeches
Alessandro Vatri