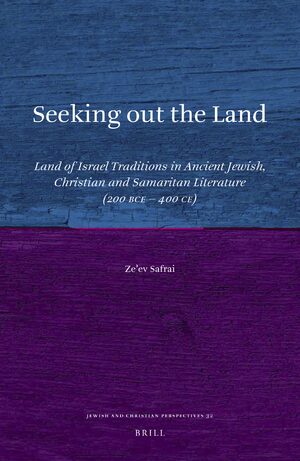 Author: Ze'ev Safrai
Seeking out the Land describes the study of the Holy Land in the Roman period and examines the complex connections between theology, social agenda and the intellectual pursuit. Holiness as a theological concept determines the intellectual agenda of the elite society of writers seeking to describe the land, as well as their preoccupation with its physical aspects and their actual knowledge about it.
Ze'ev Safrai succeeds in examining all the ancient monotheistic literature, both Jewish and Christian, up to the fourth century CE, and in demonstrating how all the above-mentioned factors coalesce into a single entity. We learn that in both religions, with all their various subgroups, the same social and religious factors were at work, but with differing intensity.

€160.00$184.00
​
Add to Cart
Ze'ev Safrai (1948) is a professor in the Department of Land of Israel Studies and Archaeology, Bar Ilan University, Israel. He specializes in the Roman and Byzantine periods. Prof. Safrai has published many books and articles, including The Economy of Roman Palestine and a commentary on the Mishna (23 volumes to date).
Contents Editorial Statement Acknowledgements List of illustrations Abbreviations Introduction  The Aim of the Book  The Approach of the Ancients to the Bible 1 The Geography of the Land in Second Temple Literature  1.1 Apocrypha and Pseudepigrapha  1.2 Greek Jewish Writers from Egypt  1.3 The Septuagint  1.4 The Essene Writings 2 The Description of the Land of Israel in Josephus’ Works  2.1 The Description of the Land of Israel (War 3:35–58)  2.1.1 The Description of Samaria  2.1.2 Idumaea  2.1.3 Coastal Region  2.1.4 Administrative Division  2.1.5 Agrippa’s Kingdom  2.2 Jericho and Gennesar (War 3:506–521, 4:451–476)  2.3 Jerusalem, Jotapata, Gamala, Machaerus, and Masada  2.4 Biblical Geography in Josephus  2.5 The Portions of the Tribes  2.6 Scattered Descriptions  2.7 Conclusions 3 The Land in Rabbinic Literature  3.1 The Land-Dependent Commandments  3.1.1 The ‘Canonical’ Halakhic Rule  3.1.2 The Land-Dependent Commandments in Second Temple Literature  3.1.3 Josephus  3.1.4 Sectarian Literature  3.1.5 Rabbinic Sources – First Century  3.1.6 Land-Dependent Commandments in Rabbinic Literature – The Basic Explanation  3.1.7 Heave Offerings and Tithes Outside the Land  3.1.8 Syria  3.1.9 Main Conclusions  3.1.10 The Reasons for the Creation of the Various Halakhot  3.2 Geographical Implications of the Halakhot Relating to the Land  3.2.1 Classification of Settlements  3.2.2 Definition of Settlement Boundaries  3.2.3 Definition of Roads  3.2.1 The Law of Foodstuffs  3.2.2 Personal Lineage  3.2.3 The Priestly Courses  3.3 Praises of the Land  3.4 Biblical Geography  3.5 Forms of Representation of the Land  3.5.1 Literal Exegesis  3.5.2 Homiletic Interpretation  3.5.3 Interpretation from Actual Reality  3.5.4 Interpretation Reflective of Geographical Traditions  3.5.1 Realistic Etymology  3.5.2 Homiletic Etymology  3.5.1 Realistic Identification  3.5.2 Homiletic Identification  3.5.3 Allegorical Identifications  3.5.4 Identification from the Speaker’s Present  3.5.5 Identification Based on Tradition  3.6 The Land of Israel in the Aramaic Targumim  3.7 The Attitude toward the Land in the Babylonian Talmud 4 The Evolution of the Concept of the Sanctity of the Land  4.1 Concern for the Land per se  4.2 Jerusalem as a Model  4.3 The Origins of the Explicit Concept  4.4 Organizational Frameworks  4.5 After the Destruction of the Temple  4.6 The Expansion of the Concept after the Bar Kokhba War 5 The Land in Early Christian Literature  5.1 Introduction  5.2 Theological Interest: The Sanctity of the Land  5.3 Factual Attitudes toward Jerusalem and the Temple  5.4 The Downgrading of Jerusalem and the Land  5.4.1 The Socio-Political Background  5.4.2 ‘Second’ or ‘Other’ Jerusalems  5.4.3 The Restored Sanctity of Jerusalem  5.5 Actual Concern with the Land  5.5.1 Chronological Analysis of the Geographical References  5.5.2 Composition History  5.5.3 The Entries from the Gospels  5.5.4 A Jewish Vorlage?  5.5.5 Familiarity with the Land  5.5.6 The Identifications  5.5.7 Summary  5.5.8 Other Works by Eusebius  5.5.1 Epiphanius  5.5.2 Jerome  5.5.3 Pilgrims’ Literature  5.5.4 The Vulgate  5.5.5 Cyril of Jerusalem  5.5.6 The Syrian Fathers  5.5.7 The Peshitta  5.6 Forms of Preoccupation with the Land 6 The Land in Samaritan Literature  6.1 Samaritan Literature  6.2 The Centrality of Mount Gerizim  6.3 Baba Rabba’s Division of the Land  6.4 The Description of the Tribal Portions  6.5 Indifference to the Land  6.6 The Samaritan Targum 7 Jewish and Christian Sacred Sites in the Holy Land  7.1 Introduction  7.2 Jewish Sacred Tombs and Holy Sites  7.2.1 Hebron  7.2.2 The Tomb of Joshua  7.2.3 The Tombs of David and Solomon  7.2.4 Rachel’s Tomb  7.2.5 The Tomb of Eleazar and Phinehas  7.2.6 The Tomb of Moses  7.2.1 Shechem  7.2.2 Mount Hermon  7.2.3 The Mount of Olives  7.2.4 Mizpah  7.2.5 Mount Tabor  7.2.6 Mount Carmel  7.2.7 Tiberias and the Sea of Galilee  7.2.8 Mount Sinai  7.2.9 Bethel  7.2.10 Additional Sites  7.3 Christian Sacred Sites in the Holy Land  7.3.1 Popular Tradition and Religious Establishment  7.3.2 The Institutionalization Process  7.3.1 The Current Scholarly Proposals  7.3.2 The Development of the Cult of Saints  7.3.3 The Development of Pilgrimage  7.3.4 The Development of Sacred Sites and Their Identification and Rediscovery  7.4 Holy Places in Judaism and Christianity: Similarities and Differences 8 Concern with the Land in the Roman-Byzantine Period: An Overview  8.1 The Basic Attitude toward the Land and Jerusalem  8.2 The Sanctity of Jerusalem  8.3 Jewish and Christian Sacred Sites  8.4 Actual Concern with the Land  8.5 Forms of Information about the Land Literature  Source Editions  Secundary Literature Subject Index Source Index
Students and scholars of Christian and Jewish studies in antiquity, the history of ideas and culture, students of translation technique and lovers of the Holy Land.