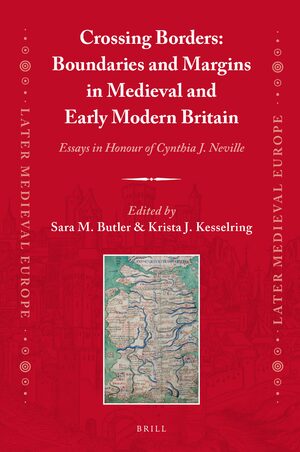 Editors: Sara Butler and K.J. Kesselring
A set of essays intended to recognize the scholarship of Professor Cynthia Neville, the papers gathered here explore borders and boundaries in medieval and early modern Britain. Over her career, Cynthia has excavated the history of border law and social life on the frontier between England and Scotland and has written extensively of the relationships between natives and newcomers in Scotland’s Middle Ages. Her work repeatedly invokes jurisdiction as both a legal and territorial expression of power. The essays in this volume return to themes and topics touched upon in her corpus of work, all in one way or another examining borders and boundaries as either (or both) spatial and legal constructs that grow from and shape social interaction.
Contributors are Douglas Biggs, Amy Blakeway, Steve Boardman, Sara M. Butler, Anne DeWindt, Kenneth F. Duggan, Elizabeth Ewan, Chelsea D.M. Hartlen, K.J. Kesselring, Tom Lambert, Shannon McSheffrey, and Cathryn R. Spence.
E-Book (PDF)

€88.00$106.00
​
Add to Cart
Sara M. Butler, Ph.D. (2001), Dalhousie University, is King George III Professor in British History at The Ohio State University. Her publications include The Language of Abuse: Marital Violence in Later Medieval England (Brill, 2007), Divorce in Medieval England: From One to Two Persons at Law (Routledge, 2013), and Forensic Medicine and Death Investigation in Medieval England (Routledge, 2015).
Krista J. Kesselring, Ph.D. (2000), Queen’s University, is Professor of History at Dalhousie University. Her publications include Mercy and Authority in the Tudor State (Cambridge UP, 2003) and The Northern Rebellion of 1569 (Palgrave, 2007).

''This is a stimulating set of essays that will be of interest to historians of medieval and early modern Britain, and to scholars with an interest in border studies. It is a genuinely British collection, with material from different regions of England, Scotland, and Wales, as well as a number of frontiers. The authors, as a group, set their research in clear historical and historiographical context, making it possible for readers to engage with a diverse set of essays and understand how the papers not only enter into dialogue with Neville’s work but also advance their own fields''. Morgan Ring, in Canadian Journal of History , 54.1-2 (2019).
List of Illustrations
Notes on Contributors

2 Henry and the Welsh March: The Application and Limits of Royal Patronage and Glyn Dwr’s Rebellion in South Wales, 1399–1405
Douglas Biggs

11 Crossing Borders and Boundaries: The Use of Banishment in Sixteenth-Century Scottish Towns
Elizabeth Ewan

12 Marks of Division: Cross-Border Remand after 1603 and the Case of Lord Sanquhar
K.J. Kesselring

Scholars interested in the history of marches and marginality, border studies, and issues of jurisdiction in medieval and early modern Britain.